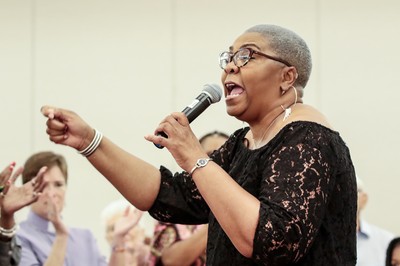 Voices of Sophia guest speaker the Rev. Traci Blackmon. The Rev. Blackmon represents the Justice & Witness Ministries of the United Church of Christ and Pastors in Florissant, Mo. —Photo by: Danny Bolin

“Bushes are burning all over this world,” pointed out the Rev. Traci Blackmon. Yet few of us turn aside, like Moses, to “focus on what God was and is doing” where we are.

While others may have passed by without noticing a burning bush in the desert, “normalizing the event in their minds,” Moses turned aside from his preoccupations to hear God’s call.

“Pay attention to the bushes that are burning in your life,” she concluded. “Have your eyes open, and speak up.”

Manley Olson of PV4J presented one of the organization’s 2018 “Promotion of Social Righteousness Awards” to Emily Wigger of Alton, Ill., a founder and the first convenor of the Voices of Sophia in the aftermath of the ecumenical Reimagining Conference of 1993.