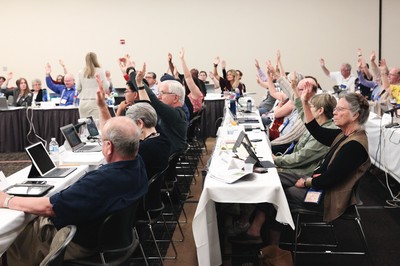 Responding to two overtures raising concerns about the administration of the Jarvie Commonweal Fund, Committee 13 of the 223rd General Assembly (2018) issued a call for reconciliation.

Later, the committee passed almost unanimously a substitute motion asking the GA223 co-moderators to form a team to identify and engage all parties in a peacemaking and reconciliation process and report back to the 224th Assembly.

The fund was established in 1925 by a wealthy lifelong Presbyterian, James N. Jarvie, to aid older adult Presbyterians in the New York City area “who in their declining years find themselves without sufficient means of support.”

The original overtures had called for the creation of an administrative commission or special committee. Advocates of those overtures and six speakers at an open hearing cited concerns about a lack of openness, accountability and compliance with donor intentions on the part of the Presbyterian Foundation, which administers the Jarvie fund.

Most speakers at the open hearing affirmed the Foundation’s administration of Jarvie and noted that the concerns raised by the overtures had been addressed multiple times by both secular and church bodies, including the 222nd General Assembly. The speakers included the Rev. Marjory Roth, who was hired last year as the first full-time chaplain Jarvie beneficiaries.

The committee voted to commemorate the Jarvie Commonweal Service’s 90th anniversary and affirm the work of the program.

In other actions, Committee 13: