Threat made against one speaker outside of meeting 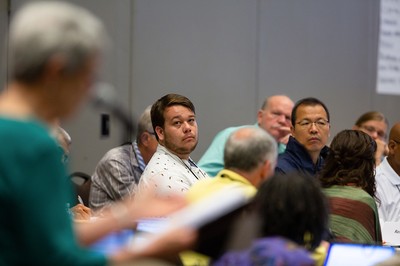 Members of the [12] Middle East Issues Committee hear from an overture advocate at the 223rd General Assembly on Monday, June 18. —Photo by: Michael Whitman

The 223rd General Assembly’s Middle East Committee has signed off on most of the overtures and commissioner resolutions presented during its two days of meetings. The overtures covered issues around Israel/Palestine, the U.S. government’s decision to disengage with Iran and the Syrian conflict.

While the committee meetings themselves were respectful and calm, the ongoing debate over the Israeli occupation of Palestine created some concern outside committee sessions. One speaker was confronted by another individual after the group broke for lunch on Monday. Once the committee reconvened, Moderator Charon Barconey addressed the panel.

“One of our speakers shared with the committee that they were followed across the street, where an individual made a statement that could be considered a threat,” she said. “Authorities were notified, and it appears the threat was made by someone who had not registered with the General Assembly.”

A security officer was stationed in the hall for the remainder of the first day of meetings.

Eleven out of 13 overtures and resolutions considered by the committee addressed issues surrounding Israel/Palestine. The committee rejected one condemning the militarization of Palestinian children to be used in attacks on Israeli citizens.

The committee also disapproved a resolution that would no longer classify Israel as a “colonial project.”

An overture from the Presbytery of Grace was approved with amendment urging PC(USA) staff, committees and task forces to remain committed to justice for Palestinians in the West Bank, Gaza and Israel.

The committee also approved an overture urging the real estate company RE/MAX, LLC, “to do everything within its legal and moral power” to stop facilitating the sale of property in Israeli settlement colonies.

“I rejoice in reconciliation, but the elephant in the room is the occupation. If we truly seek reconciliation, that needs to be the consequence of justice, restoration of human rights and dignity,” said Victor Makari, a Missionary Advisory Delegate. “There can be cordial encounters between groups, but there can be no reconciliation unless justice is exercised.”