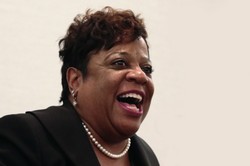 The denomination’s top two officers told the Way Forward Committee on Tuesday that the agencies they lead will live faithfully and collegially together no matter what governance model the committee recommends to the General Assembly.

“Whatever this group comes up with, I want as the executive director to be able to do the job I need to do,” said the Rev. Diane Moffett, the new president and executive director of the Presbyterian Mission Agency. “I want to work together, but when I get too involved in the weeds, I can’t see the big picture. If this doesn’t work or it doesn’t fit, I will lift my voice like a trumpet and you will hear it. That’s where I stand on the issue.”

The issue is whether the committee should recommend that the General Assembly reform the A Corporation, the Presbyterian Church (U.S.A.)’s centuries-old corporate entity. The current A Corporation membership exactly matches that of the Presbyterian Mission Agency Board, but the Way Forward Commission’s recommendation would include representation from other agencies, among other changes.

The A Corporation “is a structural flaw that has been here for ages,” said the Rev. J. Herbert Nelson, II, stated clerk of the General Assembly. “It occurred over the years trying to bring the church together. … I have no doubt Diane Moffett and I can work together, but I do think the A Corporation is too big at this point for any of us with a vested interest to work it out. If that were possible, it would have happened already.”

Nelson said he doesn’t see a disconnect between the Office of the General Assembly, which he heads, and the PMA.

“We inherited the history of two denominations coming together, north and south struggles. Deals were made to get along and stay in the same church, and over time it has gotten convoluted. People don’t remember that history, and there is no one narrative you can point to. What this process does is give us a clear view of what type of resources we need.” 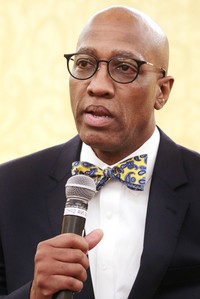 “Who would not want a seat at the table?” Nelson said. “I think that is what we are asking for. It’s about power sharing, and there are many models by which we can share power. We come up with the best decision we can to make sure all people are heard. There’s something Christian about that.”

Moffett told the committee she is interested “in bringing life and openness to the system. I depend on the Holy Spirit to work through the body to help us get to the work of ministry.”

To some Presbyterians, “it can look like the national church is doing things that are inconsequential,” she said. “People are worried about putting food on the table and having clean water. There is a lot of work to do because there is a lot of suffering out there. We need to get to it, and create a way of operating that allows us to get to it — a way that’s streamlined and keeps us relevant.”

“We have to have a collective voice as we move ahead as a church,” she said. “At the end of the day, it’s important to receive input, reflections and thoughts from staff. Good leadership will seek that.”

During his six years heading up the PC(USA)’s Washington office, Nelson served in the PMA before moving over to the OGA following his 2016 election as stated clerk during the 222nd General Assembly (2016).

“I have a deep and abiding faith in the work of mission, going back to my mother’s work in global ministries,” he said. “This is not about throwing anybody under the bus. It’s about doing something different. We can restore trust sitting around the same table.”