Take the baton from MLK

National Black Presbyterian Caucus to move ‘from education to action’ 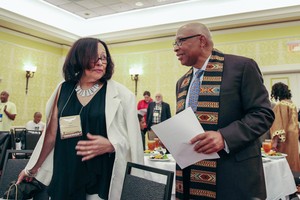 Motivation for racial justice fed the 120 souls gathered for the dinner of the National Black Presbyterian Caucus (NBPC) Monday, with the Rev. Thomas H. Priest Jr. saying it is time to finally pick up the baton from the Rev. Martin Luther King Jr. and act for racial justice and equity at the 223rd General Assembly (2018).

“It takes all the feet on the street,” said Priest, who is president of the NBPC, co-chair of the Advocacy Committee for Racial Ethnic Concerns of the PC(USA) and member of the Presbytery of Detroit.

Presbyterians of many backgrounds attended the event, which featured the theme “Where Do We Go from Here? Seeking Racial Justice and Equity.”

“(The NBPC) is not doing anything until we pick up the baton that Dr. MLK is handing to us,” Priest said, urging those gathered to invite Christian brothers and sisters with privilege to take action and report the accomplishments a year from now, when the NBPC holds its biennial convention in Atlanta.

In opening comments, the Rev. Craig Howard, transitional presbytery leader of the Presbytery of Giddings-Lovejoy, urged people to take to the streets for Tuesday’s Presbyterian-led march on the City Justice Center. The demonstration was planned as a witness to injustice and a call for change stemming from the 2014 police shooting of Michael Brown in nearby Ferguson, Missouri.

“We are now called … to move from education to action,” Priest said. “This is work started by our ancestors and it is for us to continue.”

Priest called for the PC(USA) to become “a visible, diverse partnership – koinonia – at all levels.”

Members were urged to encourage young people to participate in leadership of the NBPC and to work in partnership with white brothers and sisters who can use their privilege in the call for justice and equity for all people. To achieve this, Priest said, “put on the whole armor of God.”