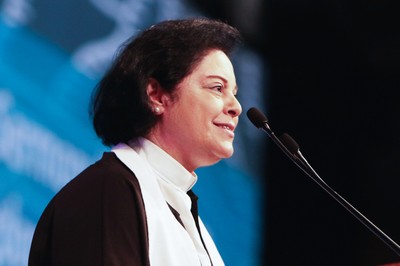 The Rev. Najla Kassab, President of the World Communion of Reformed Churches delivers sermon "Towards a Kingdom of Reconciliation" at the Ecumenical Service of Worship on Wednesday at the 223rd General Assembly. —Photo by: Danny Bolin

“We are called to change things, and to change the world as well,” said the Rev. Najla Kassab, president of the World Communion of Reformed Churches, preaching Wednesday morning at the Ecumenical Service of Worship of the 223rd General Assembly.

Her sermon, “Towards a Kingdom of Reconciliation,” was based on a text by the Apostle Paul, 2 Corinthians 5:11–6:2.

Paul wrote at a time of divisions within the congregation in Corinth, speaking with fervor about the Christian vocation to bear “the message of reconciliation” as “ambassadors for Christ” (5:19–20).

Kassab discussed Paul’s approach to reconciliation as seeking unity “beyond the flesh.”That is, looking beyond the human condition, beyond a person’s wealth or marginality, beyond outward physical appearance. Following Christ’s resurrection, it was no longer appropriate to form judgments on such grounds, Paul taught.

A minister of the National Evangelical Synod of Syria and Lebanon, Kassab reflected on her family’s experience of Israeli attacks on Beirut. “With the start of the Lebanese War, outlooks changed,” she said. “Before, we were hardly aware of who was Christian and who was Muslim.”

Suddenly, they saw their neighbors “according to the flesh,” or “from a human point of view” (5:16). “Our challenge is to live the Jesus paradigm,” said Kassab, “… to see beyond the flesh.”

Commitment to reconciliation, Kassab believes, “is tested at the point of pain. But reconciliation can never be achieved by violence; violence will bring more violence all around the world.” Overcoming pain and violence, war and separation of children from their families, requires that we see and live “beyond the flesh,” nurturing the reign of reconciliation on earth.

Led by ministers and lay people from more than a dozen denominations and nations, the GA Ecumenical Service of Worship was based on a service of Holy Communion in Churches Uniting in Christ Liturgy (adapted for local use). Co-presiding at the Lord’s Table were the Rev. J. Herbert Nelson, stated clerk of the General Assembly, and the Rev. Farouk Hammo, Ecumenical Advisory Delegate from the Assembly of the Evangelical Presbyterian Churches in Iraq.

The offering at the service was taken in support of the Deirmimas Presbyterian Dispensary, a ministry of the Deirmimas Village Church in South Lebanon, affiliated with the National Evangelical Synod of Syria and Lebanon. The dispensary provides free medical and pharmaceutical care to refugees from Iraq and Syria.