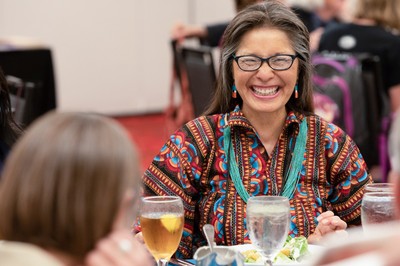 Repudiating the “Doctrine of Discovery” will help the Presbyterian Church (U.S.A) address the harm of past injustices and inform the denomination in its future mission work, a Presbyterian human rights attorney said Tuesday.

The “discovery” doctrine led to abuses generations ago that continue to traumatize Native Americans, June Lorenzo said in an address during the Native American Consulting Committee dinner. A member of Laguna United Presbyterian Church in Santa Fe Presbytery, she served on the team that produced the Doctrine of Discovery report to be received by the PC(USA) General Assembly this week.

The doctrine originated as a papal teaching that European countries used to justify their colonization of other parts of the world. It also played a role in the westward expansion of the United States, and large numbers of Native Americans lost their land, and their lives, as a result. Lorenzo said Native American women and children often were sexually abused by military personnel.

“It is no wonder that we have more and more native scholars who say that you cannot leave intergenerational trauma out of the picture” when considering the plight of Native Americans, she observed.

The General Assembly is being asked to urge Presbyterians to repudiate the doctrine and confess their complicity in it. Lorenzo reminded the gathering that the rights of indigenous people is an issue that goes beyond the borders of the United States. She said the PC(USA) should always be concerned about justice for indigenous people as it pursues its international mission work.

The dinner guests were informed about education/leadership development grants available through the Presbyterian Mission Agency’s Native American Leadership Fund Award.  The deadline to apply for a grant is Aug. 31.  An  application can be downloaded from pcusa.org/native-american-leadership-grant.