‘Christ calls us to serve with people who need it most’ 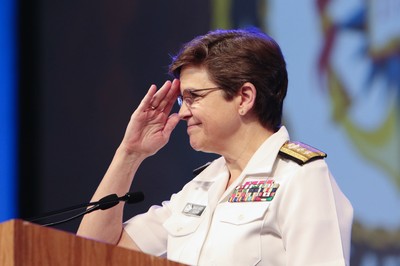 While the religious backgrounds of U.S. military personnel have changed greatly over the past three decades, their spiritual care continues to be a pressing need, the U.S. Navy’s chief of chaplains said Wednesday.

Rear Admiral Margaret Grun Kibben, a Presbyterian minister of Word and Sacrament, addressed commissioners to the 223rd General Assembly on the day she celebrated her 35th anniversary as a Navy chaplain.

When she began her career, she said, there was a common religious language that included such words as “forgiveness,” “grace,” “faith” and “reconciliation,” and these words were understood.

Today, she said, military chaplains not only serve people from diverse religious traditions, but have many people in their charge who have no religious background at all: “Many men and women we deal with have never darkened the door of a church, a mosque or a synagogue.”

Nevertheless, Kibben said, chaplains are called to “care for each soul in our command and our service.” She said chaplains have a unique opportunity to provide a listening ear to military personnel in need, she said. “We have access to every space, every place and every office where people serve, and can come alongside them.”

Chaplains are expected to provide spiritual nurture for people of all ranks, including senior leadership, she said. In addition to serving as a “moral compass” for senior officers, she says chaplains often are the only people in whom they can confide when they feel lonely and afraid.

Kibben told commissioners that when young people leave their congregations to serve in the military, they can count on chaplains to help with their spiritual needs. She encouraged those present to suggest military chaplaincy as a vocational option for people who believe they are called to ministry.

“If there is any dissonance there, forgive me, but think about it very deeply,” she said. “Christ calls us to serve with the people who need it most.”