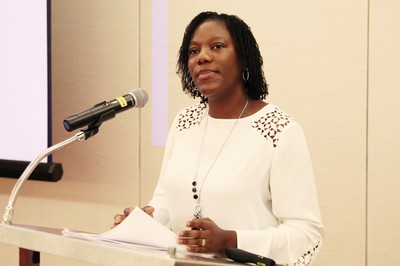 Dr. Crystal R. Sanders, author and guest speaker at the PHS luncheon on Tuesday held at the Marriott Grand in St. Louis. —Photo by: Danny Bolin

After introductory remarks from PHS Board Chair the Rev. George Abdo and Executive Director the Rev. Beth Hessel, Sanders delivered a presentation on the Child Development Group of Mississippi (CDGM), a federally funded Head Start program from 1965 to 1968.

As Sanders explained, Kenneth Neigh, UPCUSA’s general secretary of the Board of National Missions, even offered to “back any misspent funds” from CDGM, protecting the group from baseless charges of financial mismanagement by a U.S. senator from Mississippi.

Although the CDGM Head Start program lost its federal funding three years after its inception, Sanders refused to call that “a sad ending.” CDGM employed African Americans previously frozen out of the job market, including the mother of James Meredith, the first African American to enroll at the University of Mississippi.

“Many black women would go on to transfer skills they learned from working with CDGM into other areas,” Sanders said, including knowledge of administration, management and self-empowerment. Thousands of African-American children enrolled in the program received schooling, regular nutrition and medical care for the first time.

Sanders, author of A Chance for Change: Head Start and Mississippi’s Black Freedom Struggle (2016), delivered her remarks to 70 people on Tuesday. Among those attending were St. Louis representatives of the NAACP and Head Start.

“Mainline Protestant churches played a large and largely forgotten role in the Civil Rights movement,” Sanders said, adding that this is particularly important to remember in 2018, “when we need churches to step up again.”