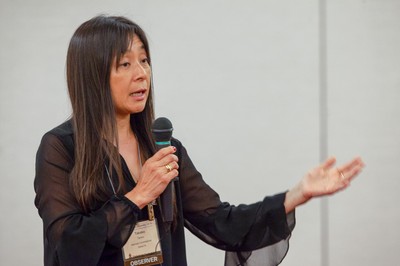 As the Presbyterian Church (U.S.A.), a denomination more than 90 percent white, struggles to become a more intercultural church, it might help to enroll more second-generation Asian Americans in U.S. seminaries.

That was among the messages delivered by Dr. Hsin-hsin Huang, a professor of pastoral theology at Aquinas Institute of Theology, the featured speaker at Tuesday’s dinner sponsored by the National Presbyterian Asian Council, part of the 223rd General Assembly (2018) of the Presbyterian Church (U.S.A.).

“Parents and pastors need to encourage second-generation Asians to attend seminary,” Huang said, noting that immigrant churches are at risk of dying for lack of immigrants. “Second-generation Asians often attend American churches because there are not enough multicultural churches. Very few Asians are in seminary, and therefore there will be no one to minister to them in their culture.”

Only four percent of U.S. residents are Asians.

“There are hardships and growth in the immigration process,” Huang said, pointing out that migrating to another country requires adjustments in language and finances, loss of culture and social status, loss of relationships and of the support of family and friends.

“Asian parents are good at giving expectation, but not support and warmth. . . . We have to be supportive of the second generation.”