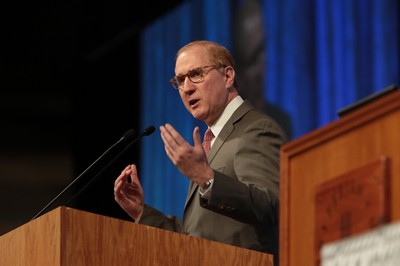 Tom Taylor, president of the Presbyterian Foundation during plenary session on Tuesday at the 223rd General Assembly. —Photo by: Danny Bolin

The 223rd General Assembly (2018) affirmed the election of the Rev. Thomas F. Taylor to a third term as president and CEO of the Presbyterian Foundation. In a brief address to commissioners following the vote, Taylor said his service with the Foundation has been “the most meaningful work I’ve ever done in my life.”

He noted that the Foundation nurtures “transformational generosity” in both the giver and the recipient, adding, “We’re giving an average of $60 million a year, nationally and internationally.”

The Foundation receives some 24,000 new gifts a year, Taylor said. “The vast majority of funds we hold are for congregations.”

In response to a request of the 2012 Assembly, the Foundation has begun a program of “positive investing” in microfinance projects in Israel/Palestine.

Taylor’s election was the only business item dealt with by Assembly Committee 13 that was not on the consent agenda and had to be voted on by the full Assembly. The committee considered business related to four of the six national agencies of the Presbyterian Church (U.S.A.): the Board of Pensions (BOP), Presbyterian Investment and Loan Program (PILP), Presbyterian Publishing Corporation (PPC) and the Presbyterian Foundation.

In its report to the Assembly, the committee called on the heads of the BOP, PILP and PPC to address commissioners for four minutes each.

Other business approved by commissioners on the consent agenda included: