The Rev. Diane Moffett wants Presbyterians to ‘be love with skin on it’ 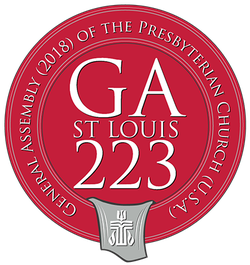 The 223rd General Assembly (2018) confirmed the Rev. Diane Moffett as president and executive director of the Presbyterian Mission Agency by voice vote on Wednesday evening.

Moffett will lead the Presbyterian Church (U.S.A) agency charged with conducting the church’s national and international mission endeavors. A veteran Presbyterian pastor, Moffett comes to the role from Saint James Presbyterian Church in Greensboro, North Carolina, where she served for 13 years. She has also been pastor of congregations in California and New Jersey.

Moffett was elected by the PMA Board in May and her confirmation was recommended this week by the Assembly’s Mission Coordination Committee.

Prior to the vote, Moffett told commissioners: “I have a passion and love for people that moves me to say yes to all of the challenges and yes to all of the responsibilities and yes to saying press the reset button, let go of the past and embrace the future and look for creative ways for us, you and I, to be love with skin on it re-presenting Jesus in this day and in this time wherever the liberating and loving, healing presence and power of God are needed.”

After Moffett spoke, she received a ringing endorsement from the Rev. Dianna Wright, associate presbyter of Salem Presbytery, where Moffett is a member. With a group of Salem Presbytery ruling and teaching elders standing with her, Wright said, “As you can tell, she is really excited and full of energy and God is ready to use her for the life of the church and the world, and we ask you to confirm what God already knows will be a great gift to the church.”

The Assembly confirmation is to a four-year term. The PMA has been under interim leadership since the resignation of Linda Valentine in 2015.

Like the Moffett confirmation, the other items presented by the Mission Coordination Committee passed by wide majorities, but two of its proposed actions were amended.

One of them was an overture aimed at helping congregations, presbyteries and seminaries address serious mental health issues. It allocates $250,000 to the PMA for this effort, and it instructs the agency to update a 2008 publication titled “Comfort My People: A Policy Statement on Serious Mental Illness.”

The Rev. Dan Milford, a commissioner from Mission Presbytery, brought to the floor some recommendations that were narrowly rejected by the committee earlier this week. His amendment passed 443–60.  Much of what he proposed had been recommended by the Advisory Committee on Social Witness Policy (ACSWP) in its comments on the overture. Among ACSWP’s comments were recommendations that would draw seminary professors, the ACSWP and the PMA’s Research Services office into the effort. Another component of Milford’s amendment, which was not suggested by ACSWP, calls for the creation of a churchwide network concerned with mental illness.

The other Mission Coordination Committee item amended by the Assembly was an action related to the creation of a task force to determine if there is a need for an LGBTQ+ advocacy committee in the denomination. Commissioners voted to change the terminology from LGBTQ+ to LGBTQIA+. The change was proposed by the Rev. Steve Werth, a commissioner from Pittsburgh Presbytery. He said the new language is the “current and fullest representation” of this group.

Asked by a commissioner what the acronym stands for, the Rev. Cindy Kohlmann, the Assembly’s co-moderator, replied: “lesbian, gay, bisexual, transgender, queer, intersexual, asexual, but the ‘plus’ recognizes that we are fluid people.”

In other Mission Coordination Committee-related business, the Assembly voted to:

— Urge congregations, mid councils, seminaries, Presbyterian women’s groups and other denominational organizations to “confess their complicity and repudiate the Doctrine of Discovery.” The doctrine, which originated with a 15th-century papal bull, became a legal doctrine in the United States that was used to invalidate or ignore the possession of land by Native Americans.

— Direct the PMA to work with mid councils to conduct an inventory of the maintenance needs of Native American congregations and chapels. The action also mandates that a “means be established to match identified projects with teams of volunteers capable of making the repairs.”

— Approve a study of the “place and purpose of humanities” in PC(USA)-related colleges and universities.