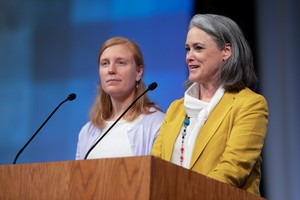 By a vote of 352–160, the 223rd General Assembly (2018) approved a motion presented by the Assembly Committee on Theological and Church Growth Issues and Institutions that will initiate the process toward amending the Book of Confessions to potentially include the Rev. Dr. Martin Luther King Jr.’s “Letter from a Birmingham Jail.”

The overture from the Presbytery of the Twin Cities Area carries with it financial implications of $41,080 over a two-year period.

Teaching Elder Commissioner Erin Hayes-Cook, of the Presbytery of Elizabeth, addressed her experience as a member of Committee 14. “We recognized the urgency in our current context,” she said. “What we found was that within the current structure, there is no action for a contemporary statement of faith. If we approve this motion, our church can study the letter now. If we enter into the process outlined in the Book of Order, it would give us an opportunity to further discern whether [the letter] belongs in the Book of Confessions or whether we need to find a further category.”

As the motion was being debated, Teaching Elder Commissioner Rose McCurdy, of the Presbytery of Winnebago, rose to say that she was “shocked by the financial number,” and requested a breakdown.

John Wood, speaking for the Office of the General Assembly, explained that the projected expenditures are associated with the formation and meeting costs of the required 15-member committee as outlined in G-6.03 in the Book of Order.

An amendment moved by Teaching Elder Commissioner Debra Avery, of the Presbytery of San Francisco, which would have removed the Book of Confessions process from the motion —  commending King’s letter only to the church for study — failed by a vote of 213–302.

Speaking against the amendment in favor of the committee’s original recommendation, Alexandra Hunt, a young adult advisory delegate from the Presbytery of New Covenant, said that “it’s important for not only youth, but also for adults to have access to [the letter] on a regular basis.”

The Assembly also approved Item 14-01, as amended, a five-part recommendation on developing a letter to accompany the Confession of Belhar, which was added to the Book of Confessions in 2016.

In answer to a question from Teaching Elder Commissioner Darren Pollock, of the San Fernando Presbytery, on how the proposed letter would differ from the 2014 letter, Clifton Kirkpatrick, a co-moderator of the Special Committee on the Confession of Belhar, explained that what was done in 2014 was solely to adopt the Confession.

“We’re concerned with the context in the US,” said Kirkpatrick. “Whenever Belhar has been adopted with its fundamental principles, it has always been accompanied by a letter that gives those principles life.”

The Assembly also acted on the report of the Special Committee to Study the Reformed Perspective on Christian Education in the 21st Century, approving, as amended, its six-part charge. The prevailing amendment clarified the committee’s emphasis on the importance of intergenerational ministry and its recommendation, according to Emily Chudy, a teaching elder commissioner from the Presbytery of Donegal, that the Presbyterian Mission Agency “put energy into intergenerational formation.”

An overture from the Presbytery of Wabash Valley, which would have added Constitutional questions to the installation of Ministers of Word and Sacrament to be answered by members of the presbytery, was disapproved by the Assembly in accordance with the committee’s recommendation. A substitute motion by Ruling Elder Commissioner Linda Long, Presbytery of Wabash Valley — with which the Advisory Committee on the Constitution had issues that remained unaddressed — failed to become the main motion.

A Commissioners’ Resolution: On Supporting the Reclaiming Jesus Statement with Prayer and Study was approved to refer, as amended, to the PMA’s Office of Theology and Worship.

In other business, the Assembly approved the recognition of the Rev. Katie Geneva Cannon, Annie Scales Rogers Professor of Christian Ethics at Union Presbyterian Seminary, and the Rev. Douglas Oldenburg, President Emeritus at Columbia Theological Seminary, for outstanding lifetime contributions to theological education in and for the Presbyterian Church (U.S.A.).