Former stated clerk moved by honor which memorializes his mentor 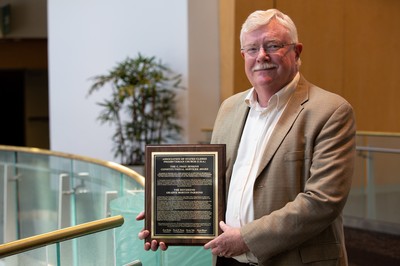 The Rev. Gradye Parsons, former stated clerk of the General Assembly from 2008 to 2016, accepted the particularly meaningful as it is named for his mentor. The C. Fred Jenkins Award is presented to those who have “given wise and prudent, and vigilant support to the Constitution and polity of the Presbyterian Church (U.S.A.).”

“Fred could calm you down over the phone,” said Parsons, referring to his early days as an executive presbyter and stated clerk for the Presbytery of Holston. “(He would) give you solid advice and usually make you think you thought of it yourself.”

The Rev. David Bartley, member the Presbytery of Maumee Valley and President of the Association of Stated Clerks who hosted the luncheon on Thursday at the General Assembly of the PC(USA), presented beautiful memorial plaque with a bag of balloons. Bartley noted “a different Gradye story” where Parsons played with balloons that were bounced around during a presbytery meeting when Bartley gave a report on camps.

While praising the more than 50 stated clerks in attendance, Parsons shared a thought from a recent sermon on keeping the sabbath he preached as an interim pastor in Knoxville, TN. He quoted Jesus’ view that the sabbath was created for humanity, not the reverse.

“I think we need to remind ourselves it’s true about our polity too,” he said. “Our polity was made so that the church can do mission.”

Jenkins served as associated stated clerk of the PC(USA) from 1990 until his death in 2000. The award description said that “Fred was available always to those who sought his counsel and wisdom, and demonstrated in his responses, in wonderful ways, a love of the church and a grace in the face of our frailties.”