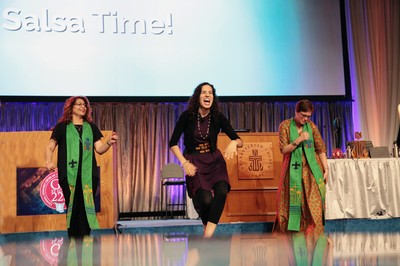 By a more than 10-1 margin Thursday, commissioners at the 223rd General Assembly approved The Way Forward Commission report designed to, as Assembly Committee on The Way Forward Moderator the Rev. Cindy Jarvis said, “discern the vision for structure and function of our denomination.”

Except for one slight language change, commissioners turned back a number of amendments to the committee’s recommendation, which will, among other things, change the structure of the denomination’s corporate entity, strive for cost equity among the various shared services delivered to the church’s six agencies and create a Moving Forward Implementation Commission to make what Jarvis called “course corrections that will be necessary” between the current Assembly and the next.

In strengthening the role of the stated clerk, commissioners rejected proposed amendments that would have eliminated his ability to exercise pastoral authority during times of crisis and would have required the stated clerk to consult with agency leaders before speaking to and for the church in matters of faith and practice.

Earlier in the week, committee work on part of the plan was put on hold for about 24 hours while the Advisory Committee on the Constitution huddled with committee and commission leadership over possible constitutional conflicts.

“The constitutional issue almost set us back to the fleshpots of Egypt,” Jarvis joked, a reference to the hardships the Hebrew people faced during the Exodus.

Asked how the new approach will change denominational culture to be more transparent and responsive, Jarvis said it’s “a question that was very much before our committee.”

An administrative action issued by the Way Forward Commission June 12 calling for greater transparency and the freedom among national church employees to speak their minds to directly address the prevailing culture, Jarvis said. Committee members “began to get their minds and hearts around what it is to work in the national offices of the church,” she said. “Consultants aren’t going to fix everything, but it’s sometimes helpful to have someone with that balcony view.”

“And how will we know [when we have successfully changed the work culture]?” she asked. “The Book of Order says our way of government is designed not to work without trust and love. I think that as love and trust are increased, trust and transparency will begin to get better.”

Commissioners solidly backed the other significant items recommended by the committee, approving the report of the All Agency Review Committee, the interim report of the 2020 Vision Team and proposals to boost translation services and require race audits of the six agencies.