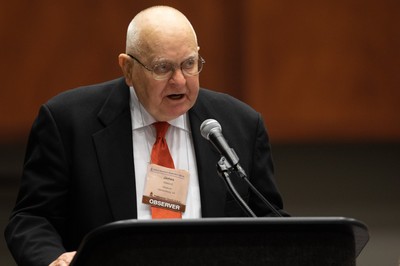 Accepting “on behalf of the one million Americans who have died at the barrel of a gun since 1979,” the Rev. James E. “Jim” Atwood, an author, pastor and nationally recognized voice on the subject of gun violence prevention, received the 2018 David Steele Distinguished Writer Award at the Presbyterian Writers Guild (PWG) luncheon at the 223rd General Assembly.

Atwood, 83, is pastor emeritus of Trinity Presbyterian Church, in Arlington, Va., and the author of Gundamentalism and Where It Is Taking America (Cascade Books, 2017), America and Its Guns: A Theological Exposé (Cascade, 2012), The Leaven of Laughter for Advent and Christmas (Trafford Publishing, 2006), and other books.

Calling gun violence “the greatest moral, ethical issue,” Atwood said, “In the ’70s and’80s, so many thought I was crazy to talk about gun violence when nobody cared.” He said he was more hopeful today, as more people, including young survivors of the school shooting in Parkland, Fla., are speaking out and taking action on the issue.

“We’ve never had a real sustained movement, but we’ve got one now,” Atwood said.

He also dedicated his award to the Presbyterian Peace Fellowship, which has developed resources on gun violence, and to GA commissioners who have been “a consistent voice” for sane regulation of firearms for more than 60 years. Those commissioners “took risks for the gospel when they returned home,” Atwood said.

“It’s tough holding your biblical and theological ground when gun-lovers threaten to leave your church and take their wallets with them.”

“Each of the 39,000 gun victims last year was born in the image of God and is a neighbor that God commands us to love. Can you think of anything more spiritual than that?”

Atwood first became an advocate for gun violence prevention – joining the board of the Coalition to Stop Gun Violence – after a member of the congregation he was then serving, Grace Presbyterian Church in Springfield, Va., was shot and killed by a robber with a Saturday Night Special. Since then, he has served as interfaith coordinator of the Million Mom March, chair of the Greater Washington chapter of the anti-gun-violence group Heeding God’s Call, and a member of the National Committee of the Presbyterian Peace Fellowship, which in 2014 selected him unanimously to receive its 2014 Peaceseeker Award.

Atwood told those at the Writers Guild luncheon, “The most effective thing you can do about gun violence is talk about it – from the pulpit, in the classroom … and when you’re in line at the grocery store.”

The distinguished writer award is named for the late David Steele – Presbyterian poet and essayist best known for his “Tuesday Morning” column in The Presbyterian Outlook – and is given biennially to a Presbyterian writer who blessed the church with his or her writing over the course of a career.