Trailblazers are recognized, in absentia, with the 2018 Award for Excellence in Theological Education 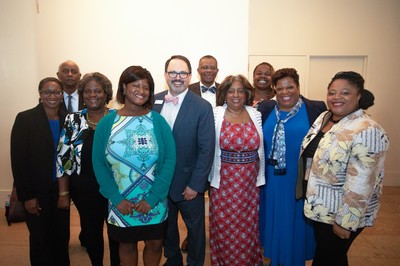 The Revs. Katie Geneva Cannon and Douglas Oldenburg were represented at the breakfast by proud family members, since health issues prevented both from traveling to St. Louis to receive their Award for Excellence in Theological Education. The award, which is conferred biennially by the Committee on Theological Education (COTE) and the Theological Education Fund (TEF) of the Presbyterian Foundation, is the highest honor in the PC(USA) for those who teach, lead and support theological education.

Cannon, a professor of theology and ethics at Union Presbyterian Seminary in Richmond, Va., is the first African-American woman to be ordained in the former United Presbyterian Church in the U.S.A. Oldenburg, a former president of Columbia Theological Seminary in Decatur, Ga., also served as moderator of the 210th General Assembly (1998).

Following a welcome by Lee Hinson-Hasty, senior director of funds development for the TEF, and the recognition of the awardees’ families and other special guests — including Assembly Co-moderators Vilmarie Cintrón-Olivieri and Cindy Kohlmann; PC(USA) Stated Clerk J. Herbert Nelson, II; Diane Moffett, the newly confirmed president and executive director of the Presbyterian Mission Agency; and Tom Taylor, president and CEO of the Presbyterian Foundation — Tom Trinidad, COTE chair, opened the gathering with prayer.

In addition to the remarks given by the honorees’ family members, Todd Oldenburg, Douglas Oldenburg’s son from Asheville, N.C.; and Bridgett Cannon, Katie Geneva Cannon’s niece from Jacksonville, Fla.; the highlight of the breakfast was the screening of two professionally produced tribute videos, in which Cannon’s and Oldenburg’s respective and unique impact on theological education was celebrated by their distinguished colleagues, students and friends.

“My father deeply regrets he could not be here to receive this recognition as his health can be inconsistent,” said Todd Oldenburg. “Education and educating others has always been a priority for my father. He saw education as an important part of his life’s work. He loved the mission of preparing the next generation for ministry. The only thing he didn’t like about being president [of Columbia Seminary] is that he didn’t get to be in the classroom teaching.”

In her remarks, Bridgett Cannon recalled when her beloved aunt — widely recognized as a founder of Womanist theology and most recently the initiator and creative force behind Union Presbyterian Seminary’s Center for Womanist Leadership — was diagnosed with leukemia.

“I just want to thank you,” Bridgett Cannon said. “I know there are so many mentees that she has out there who are saying, ‘I really wanted to see Dr. Cannon today. I wanted to hear her words of encouragement to do better and be better.’ Please keep her in your prayers as she continues to undergo her chemo.”

The tribute videos are available at the following links: