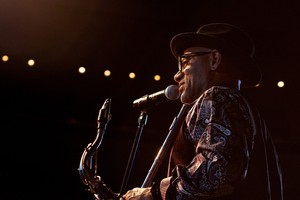 Kirk Whalum performs at the Hands and Feet Celebration concert at the 223rd General Assembly of the Presbyterian Church (U.S.A.) in St. Louis on Thursday, June 21, 2018. —Photo by Michael Whitman

Before a concert by Grammy-winning gospel/jazz saxophonist Kirk Whalum on Thursday night, a video of the Rev. J. Herbert Nelson, II, Stated Clerk of the General Assembly of the Presbyterian Church, U.S.A., was played. Nelson echoed his quote printed on the back of the Hands and Feet initiative information card given to concert-goers:

“We don’t want the Presbyterians to be simply another convention that comes to town, meets and spends some money, and then leaves without engaging the people and communities there in a sustained effort to support our Presbyterian brothers and sisters in making an impact.”

The crowd cheered the video. The Hands and Feet initiative, inspired by Nelson, seeks to engage Presbyterians in service, learning and public witness activities in the cities where the General Assembly meets. Proceeds from the concert’s ticket sales will fund Hands and Feet efforts in Baltimore, the site of the 224th General Assembly (2020).

On stage, Nelson spoke of Baltimore’s struggle. He mourned that the city has burned twice in recent years during civil unrest over police shootings, and recalled that on one occasion people sought refuge in Camden Yards, the downtown baseball stadium for the Baltimore Orioles.

Nelson invited everyone who’d participated in this year’s Hands and Feet efforts in St. Louis to stand to be recognized.

“We came to St. Louis knowing what we were gonna do,” he said, speaking of the planning that went into various Assembly-related public service and witness activities. “That’s the worst thing to do,” Nelson added, noting the need to be adaptable in responding to current realities.

He then led the crowd in a chant heard frequently in St. Louis and at this Assembly:

The crowd cheered again when Nelson mentioned the more than $47,000 raised at the opening worship offering to bail out low-level offenders from St. Louis jails on Tuesday.

The Rev. Erin Counihan, pastor of Oak Hill Presbyterian Church and a leader of public witness activities in St. Louis, then took to the stage: “Hi, friends! I can’t see any of you,” she said, blinking up at the lights. “A hundred and 11 members, y’all,” she said, referring to Oak Hill’s membership. “Small churches can do this [public witness], too. And for all you budget-wonks, it is financially sustainable!” she added as the crowd laughed.

Following Counihan, the Revs. Kate Foster Connors and Jackie Taylor of the Presbytery of Baltimore took the stage and introduced themselves: “We’re the Baltimore people!” Taylor acknowledged that the kind of work Hands and Feet does “can get a little messy.” Two interns have been employed for the next year to help coordinate the GA224 Hands and Feet efforts.

Whalum capped off the evening with a stirring 90-minute blend of gospel and jazz. Clad in a paisley print shirt, dark-colored vest, white slacks and a black fedora, Whalum — a minister and son and brother of preachers — said his grandmother, Thelma, gave him his love of music.

Whalum improvised when technical difficulties caused the sound of his saxophone to cut in and out. He simply used his voice to imitate his instrument as the crowd laughed and cheered, even using his horn as a percussion instrument, tapping and thumping it while the audience clapped along.