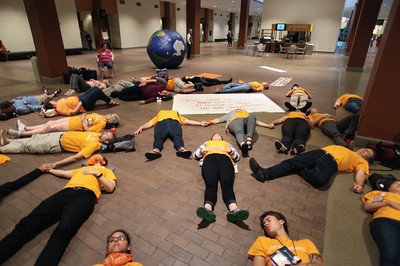 Fossil Free PCUSA representatives participate in a "die-in" in response to the divestment "no" vote. —Photo by: Danny Bolin

To divest or not to divest from the fossil fuel industry? The answer to that question was one of the highly anticipated decisions of the 223rd General Assembly.

On Friday afternoon, after four hours of discussion, the Assembly answered with a “no.”

The decision to reject divestment took the form of a “yes” vote (332–178) in favor of a minority report signed by 10 members of Committee 8: Environmental Issues. That report replaced the committee’s majority report directing divestment. The substitute – and now Assembly-approved – resolution calls on the church to continue engaging with fossil fuel companies it holds stock in.

That work is carried out by the Presbyterian Church (U.S.A.)’s Mission Responsibility Through Investment (MRTI) committee, which favored the no-divestment minority report. Representatives of MRTI and the church’s two investing agencies, the Board of Pensions and the Presbyterian Foundation, answered questions from commissioners concerning the implications of divestment and the size of church holdings in fossil fuel producers.

Rob Fohr, director of faith-based investing and corporate engagement for the PC(USA), told the Assembly that the minority report was “the best result that could come out of this Assembly.” Fohr cited work with an umbrella group of fund managers called Climate Action 100+ as a major reason to “stay at the table.” Though not recommending divestment now, MRTI contends that it is prepared to recommend divestment from fossil fuel companies in the future.

Friday’s schedule called for completion of all Committee 8 business in the morning. But by the time the Assembly broke for a worship service and lunch, the majority report and minority report had been finalized, or “perfected,” but no final vote had been taken.

During discussion of the two reports, questions and comments were many. Commissioners in line at the microphones held green or red badminton racquets signaling their desire to speak in favor of immediate action on fossil fuels or a more gradual approach.

Before debate began, the Rev. Michael Kirby of the Presbytery of Chicago, moderator of Committee 8, had delivered brief remarks summarizing the committee’s majority position. Two of the committee members who filed the minority report spoke about Presbyterians working in the fossil fuel industry, telling stories about family members who have received paychecks from ExxonMobil. 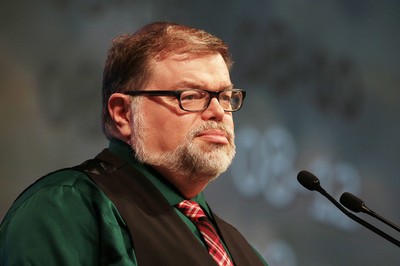 One commissioner speaking from the floor later complained that the Assembly had heard much more from minority report supporters than those on the majority side and called some of the no-divestment arguments “preaching.”

After the minority report became the main motion, it was overwhelmingly approved by the Assembly (409–106). And yet commissioners continued to approach floor microphones to speak in favor of divestment.

It fell to a sheepish Michael Kirby to tell them that divestment was no longer on the table.

After the no-divest vote, orange-shirted friends of Fossil Free PCUSA lay on their backs surrounding a large inflatable earth. The “die-in” symbolized the lives lost to climate change.