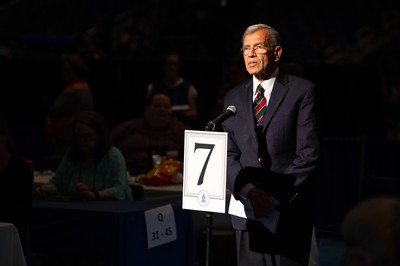 The 223rd General Assembly swiftly took up Middle East issues in a late-night session in St. Louis on Friday night. Among the action items was the approval of an overture asking RE/MAX, LLC to end the sale and rental of property in the Israeli settlement colonies in East Jerusalem and the West Bank. The overture also urges members of the company’s networks in the US not to refer clients to agents and brokers who are involved in the sale or rental of settlement properties.

“RE/MAX response came to us at the 11th hour,” said Steve Shively, committee co-moderator. “RE/MAX has a franchise practice for foreign entities that allows them to use the company name in their business practice.”

Commissioners took up an overture calling on PC(USA) congregations to support grassroots efforts to bring Israelis and Palestinians together and for staff to develop resources to work with grassroots organizations.

Committee member Peter Smith offered a substitute motion calling on the church to “celebrate whenever and wherever Palestinians and Israelis come together.” It directs the Presbyterian Mission Agency to identify grassroots organizations and ministries - especially youth groups - working for radical change. It also calls on the mission agency to make these organizations known to congregations for support and encouragement.

“We worked well together and might agree that necessary and needed change in the Holy Land will not take place on this side of Atlantic,” said Smith. “Hearts and minds need to move toward reconciliation over there. This motion might open that door.”

The substitute motion was approved.

The General Assembly approved an overture asking Israel to be in full compliance with the Universal Declaration of Human Rights by changing laws and practices that currently favor Jewish citizens while discriminating against Christian and Muslim citizens and other ethnic minorities. An amendment was approved as well calling on the US government to re-join and re-engage with the United Nations Human Rights Council.

“At the conclusion of our committee work, we heard the news that the US had intended to withdraw from the council. By doing so, we removed our voice at the table,” said Cheryl Bourne, committee member. “This amendment calls for the US to re-join and re-engage.”

Bourne told the assembly that Ryan Smith, the director of the Presbyterian Ministry at the United Nations, has written a letter to US Ambassador Nikki Haley urging the US to reconsider. 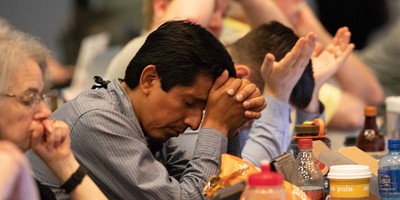 Comissioners pray for Gaza during the the [12] Middle East Issues Committee report at the 223rd General Assembly. —Photo by: Michael Whitman

The motion was approved with amendment.

The assembly also took up a response to the recent violence connected with the Great March of Return protests along the Gaza strip. More than 130 Palestinians were killed in the violence, including 20 Palestinian medics who were tending to those wounded in the violence.

Jeff DeYoe of Peace River Presbytery, offered an amendment to strike the words “by Hamas” from the motion.

“The church should speak against all discourse that inspires violence in Gaza. Such incitement is not restricted to one side,” he said. “Providing language without mentioning a specific group, is more than sufficient that the PC(USA) does not condone any language that incites violence on either side.”

The motion with amendment was approved.

The assembly also approved an overture urging the PC(USA) to engage in open dialogue with Jewish colleagues on the issue of Israeli occupation of Palestine and prepare study resources for congregations and presbyteries to utilize.