Closing worship takeaway: Always pray and never give up

Kachu: ‘Easier to get to heaven than be a Presbyterian’ 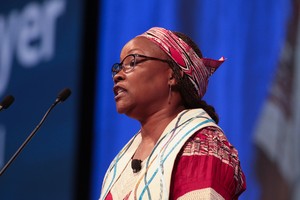 The Rev. Ekram Kachu preaches during Saturday's closing worship service at the 223rd General Assembly of the PC(USA) meeting in St. Louis. —Photo by Danny Bolin

Ordained to the ministry only three weeks earlier, the Rev. Ekram Kachu told those attending General Assembly’s closing worship Saturday that prayer is “about trusting in God while we are living in difficult times.”

Africans in general and especially Sudanese Christians “know how to pray,” she said.

“Jesus told his disciples, ‘You should always pray and never give up.’ Prayer is at the heart of worship and it is a gift from God, the desired relationship between God and us.”

Kachu preached from Luke 18:1-8, the parable of the widow pestering the unjust judge. A group called #Hashtag Chorus provided a dramatic reading of the gospel lesson from The Message. At times talking over one another, readers gave voice to phrases found in today’s headlines, including Black Lives Matter and “No justice, no peace.”

“The widow has nothing, and the judge doesn’t care,” Kachu said. “We know she is in need, and we know she has hope and will never give up. One day she will get justice.”

Kachu called it “helpful to remember we are all adopted as God’s family through Jesus Christ.”

The Presbytery of Des Moines helped found the Sudanese Support Team “and they cried with us” as Sudanese expatriates worked over the past few years to found a church where congregants could worship God in their own language, Kachu said. It wasn’t easy, but the church now offers regular services, and up to 300 people join in via social media.

“One of our members said, ‘It’s easier to get to heaven than to be a Presbyterian,’” she said, and the Presbyterians gathered for one final act of General Assembly worship laughed sympathetically.

Being a good leader requires risk-taking she said, and that includes recognizing and ministering to the refugees, widows and orphans among us.

“We have not lost hope, but please pray for our country, South Sudan,” she said. “God can use each of us. God used the widow because she knew how to ask for justice.”

Driftwood tokens were offered during the Lord’s Supper, gifts made by members of Hillside Presbyterian Church in House Springs, Mo. Tokens were intended to offer worshipers encouragement as they departed worship and continued their faith journey back home.