Home News Breaking all the ceilings

Breaking all the ceilings 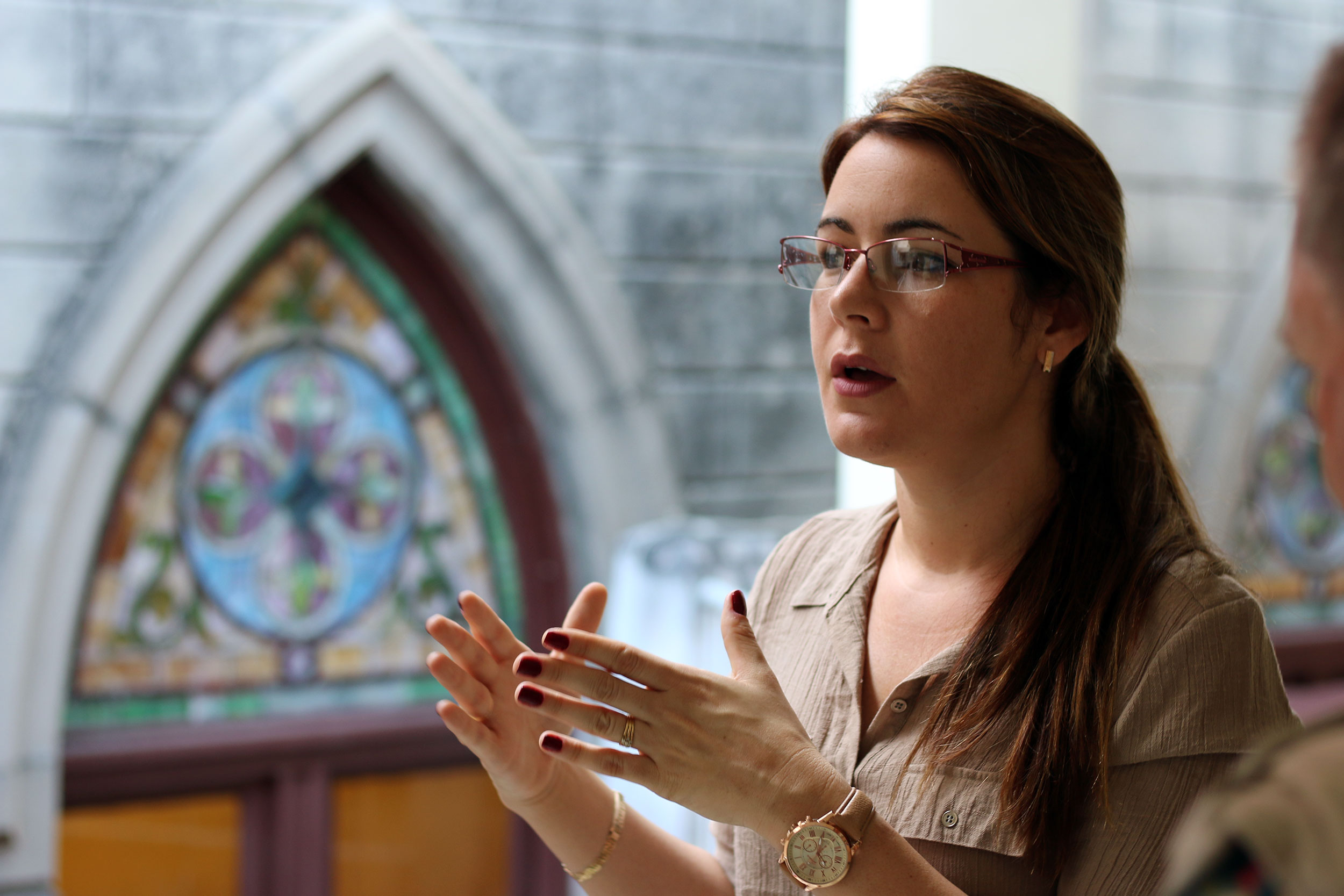 Despite the improbability of her call last winter as pastor of historic First Presbyterian Church here, the Rev. Liudmila Hernández is supremely confident about her ministry. “It is a challenge all the time but I have no doubts,” she says. “I feel energy every day and ask God, ‘This is your church — help me.’”

Hernandez, 29, is not only the first woman to pastor First Church — which was founded at the turn of the 20th century and was the first Protestant church in Havana — she is one of the congregation’s youngest pastors and is also single. You can call it the trifecta of unlikely calls.

“It’s a long history of all men and I am also single,” Hernández says, “so there have been many questions about that and my youth. One church member responded to questions about my family by saying, ‘We are her family now.’”

First Presbyterian’s history is storied. Its sanctuary, erected in 1906, is now a designated National Historical Site in Cuba. When Pope John Paul II became the first Catholic pontiff to visit Cuba in January 1998, he conducted a mass in Havana’s Plaza of the Revolution using the pulpit from First Presbyterian Church, which was transported to the site for the occasion. During the Cuban revolution in the late 1950s, the bell tower of the church was used to broadcast Radio Rebelde, which informed Cubans of the progress of Fidel Castro’s guerilla forces. Many civic and religious gatherings continue to be held at the church. 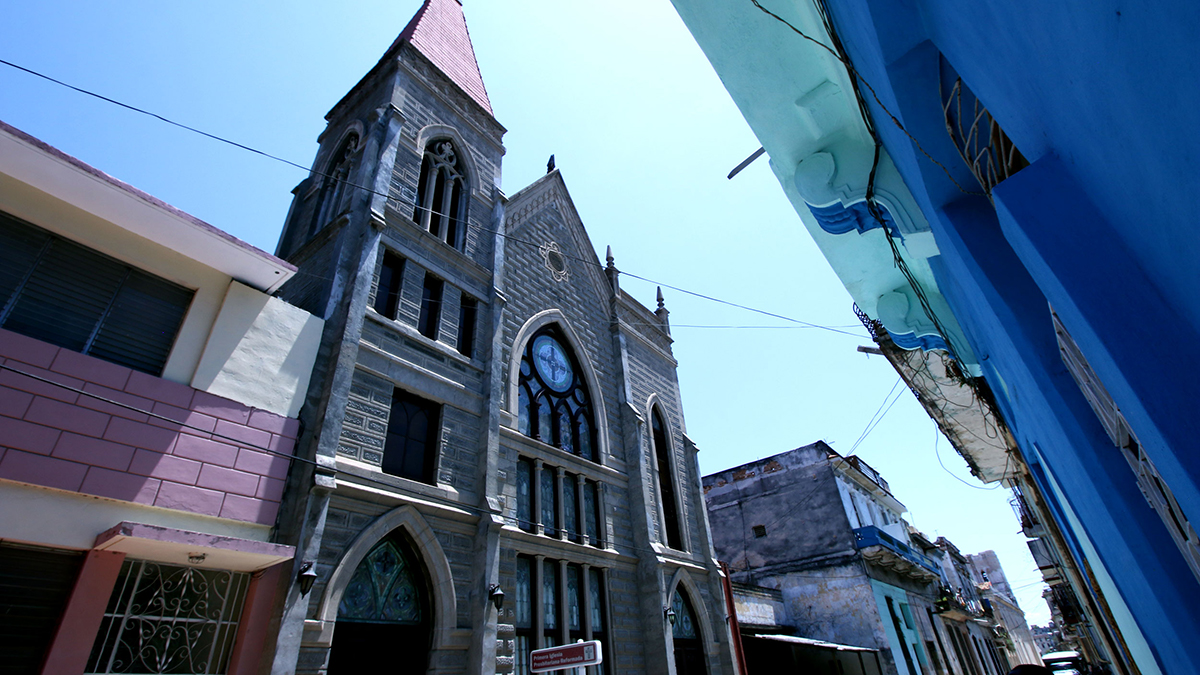 A 2014 graduate of the Evangelical Theological Seminary (SET) in Matanzas, Hernández’s first call was to the Presbyterian church in Sanctu Spiritus in central Cuba. “It was a good experience for me … a good place to start ministry,” she says. “El Centro Presbytery (the Presbyterian Reformed Church in Cuba, or IPRC, consists of three presbyteries) is a good place to learn, because there are not enough pastors, so I served two smaller congregations in addition to Sanctu Spriritus.”

Hernández was visiting partner churches in the U.S. when she was first contacted by the pastor nominating committee at Havana First. “It was a very difficult decision, because I had many feelings about the Sanctu Spiritus congregation and El Centro Presbytery,” she says. “I asked God what his plans were for me. I wasn’t thinking about being the first female, or being young and single,” Hernández continues, “but God was talking to me and the members convinced me I was their leader.” She succeeds the Rev. Hector Mendez, who recently retired after 26 years as pastor of First Presbyterian Church.

Like Presbyterian churches everywhere, First Havana is experiencing many demographic and social changes as its densely-populated neighborhood on the edge of Old Havana changes. “About 80 percent of our congregation are older adults,” Hernández explains. “Many of our members have strong Presbyterian tradition and strong traditions as part of the IPRC, but there are also many seekers and neighborhood people with very little church background. It is a challenge to minister with those different folk.”

Left: Banners of partner churches in the United States hang along the rear balcony of the sanctuary. (Photo by Fred Tangeman) | Right: This urban church serves the local community in a myriad of ways including a weekly yoga session. (Photo by Randy Hobson)

First Church also supports a group of African medical students. “They come from many traditions,” Hernández says. “They worship in a different way with choirs and dance — they have changed our worship completely. Our members lament when [the Africans] worship elsewhere.”

And a class for previously unaffiliated people has also changed the congregation’s approach to worship. “We have shed so many assumptions about worship,” Hernández says, noting that services now include more understandable language and educational notes. “First Church has become such a mix!”

After her first six months as First Presbyterian’s pastor, Hernández has identified several goals for her ministry. “I would like to work more with children and youth,” she says, noting that the church’s library is being remodeled to make it more welcoming for young people. The church is adding computers, Internet access, a research center and multi-media equipment and resources to cater to the younger crowd. “We have to be a place for them after school,” Hernández adds. “We are very serious about having young people in the building during the week.”

She also praises the psychological counseling program at the church, which serves families, couples and older adults. “We have many situations and lifestyles that we have to be open to — our ministry is to give everyone hope and meaning.”

Meet the Rev. Liudmila Hernández from Office of the General Assembly on Vimeo.

A delegation sponsored by the PC(USA) Office of the General Assembly (OGA) visited Cuba in May. Members of the delegation included the Rev. Jerry Van Marter, interim director of communications for OGA; Randy Hobson, the OGA’s photographer/videographer; Frederick Tangeman, director of communications and marketing for the Presbyterian Historical Society; and the Rev. Byron Bland, a member of San Jose Presbytery who is an international conflict resolution expert at Stanford University. They were accompanied by the Rev. Jo Ella Holman, regional liaison for the Caribbean (including Cuba) for Presbyterian World Mission; the Rev. Edelberto Valdes, pastor of the Presbyterian Church in Caibarién, Cuba, and general secretary of the Presbyterian Reformed Church in Cuba (IPRC); and the Rev. Ary Fernandez, pastor of Central Presbyterian Church in Matanzas, Cuba, and moderator of the IPRC.