Committee on the Office of the General Assembly members and PC (U.S.A.) staff meet at the Presbyterian Center in Louisville, Kentucky September 25-27, 2019. Photo by Randy Hobson.

The Committee on the Office of the General Assembly (COGA) has approved an 11-point plan to help boost financial support for the Presbyterian Historical Society (PHS). Earlier this year, the Rev. Dr. J. Herbert Nelson, II, Stated Clerk of the General Assembly of the Presbyterian Church (U.S.A.), challenged COGA and the PHS Board to come up with a new strategy. A task force presented the plan at last week's COGA meeting.

“We were worried about the sustainability of PHS in an aging building and the status of per capita funds,” said task force member Margaret Elliott. “That’s why the task force was formed. We talked about options and one was to move PHS to Louisville. There were additional options on the table.”

Nancy Taylor, acting executive director of the Presbyterian Historical Society, and Kerry Rice, Deputy Stated Clerk of the Office of the General Assembly, presented the strategy to enhance opportunities for fundraising. Among the recommendations is the aggressive search for a permanent executive director to succeed Beth Hessel, who left earlier this year.

“The search for a permanent leader begins this fall with the final candidate starting in January,” said Rice. “That’s an ambitious timeline, but we believe stabilizing leadership will also help in short- and long-term fundraising.”

Another recommendation was for PHS to join COGA in support of a sustainable per capita budget to go before the General Assembly next summer.

“It is really key to having a sustainable future for PHS and per capita is still over 60 percent of our budget,” said Taylor. “It is important that everyone come together to support the best sustainable budget we can get through GA.”

Taylor says they will also be looking to see how they can work with other church agencies.

“We hold records for all of these agencies. This is a call to continue, maintain and grow,” she said. “We are doing a service for the national church as a whole and want to make sure we have partnerships and not just service that is not understood and recognized.”

The task force also recommended keeping the PHS archives in Philadelphia, working to reduce and eventually eliminate budget deficits, build relationships with the other PC(USA) agencies, look into a partnership with the National Council of Churches and engage in a major fundraising campaign.

COGA approved all of the recommendations. Nelson applauded the plan. 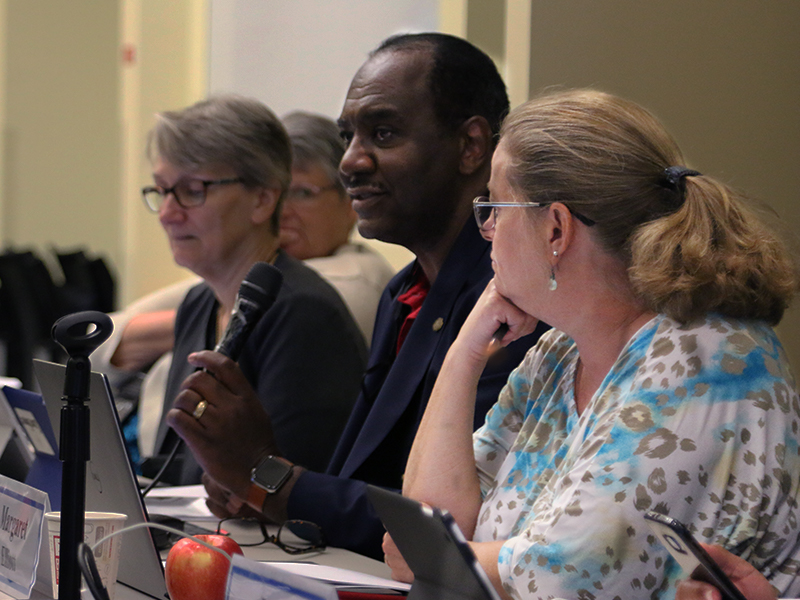 “Issues of sustainability were among my concerns when I became Stated Clerk. This is a new forging of that relationship and a move forward with mutual accountability on how to work together,” he said. “We are not dealing with an office in Louisville and one in Philadelphia with two separate identities. We are moving in a direction that values history, looking for the best way to determine how that history is maintained.”

With less than nine months before the 224th General Assembly in Baltimore, OGA staff updated COGA on plans for next year. With the retirement of General Assembly Director of Operations Tom Hay, staff has begun looking at approaching planning in a different way, including bringing in other agency representatives in the early stages.

“We need to do this work collectively because it impacts all agencies, so we must engage our colleagues at the beginning of planning and preparation,” said Valerie Izumi, manager for GA nominations and OGA exhibits. “We believe it would be better to step back and think about new ways to improve.”

In addition, Nelson says there will be a public action during GA224. Last year, hundreds marched with local residents in St. Louis over ending cash bail.

“We are planning on taking part in some type of action and there are several possibilities in the Baltimore area,” he said. “We have learned how to be very focused on how we go into a community, so we will work with Baltimore officials who have different ideas on what that ought to look like. They are very much into community organizing.”

The Co-Moderators of the 223rd General Assembly, the Rev. Cindy Kohlmann and Ruling Elder Vilmarie Cintrón-Olivieri, are already working on the worship services for next year’s event.

“We would like worship to be diverse, as plural as it can be, with multiple languages and music styles,” said Cintrón-Olivieri. “We have one of our preachers secured and the sermon will be delivered in Spanish. We want to do worship in a way that reflects how church looks in many places and how it should look in the future.”

COGA is also looking at ways to trim the costs of producing the assembly, including a recommendation to reconsider how host locations are selected for the biennial event. The church currently rotates General Assembly gatherings among four geographic areas of the country. COGA is considering a recommendation that would provide flexibility for seeking host locations that would offer financial incentives. The committee plans to look at other considerations at its February meeting.

The fall meeting concluded with a report from Nelson. He told the committee that when he began his term, he saw fragmented churches and a continuing loss of members in the denomination. Now, he says, that appears to be changing.

“We lost the least amount of churches last year than we have lost in over 30 years and the bleeding appears to be stopping,” he said. “We are seeing an increase in younger mid council leaders who are coming in with innovative ideas of leading our presbyteries and reshaping the church’s foundation with a lot of energy.”

Nelson says there are still two areas of concern for him. One involves the issue of fellowships versus churches and the need to provide “church” designations for fellowships, specifically for congregations of color.

“Immigrants come to this country to seek a new life and seek membership in the Presbyterian Church, and we don’t count them,” he said. “If we did, we would see an increase in membership now. We keep hearing reports of losing members. We have the opportunity to grow if we remove the blockage and barriers for churches doing vibrant and important work.”

Nelson says the second issue of concern is per capita.

“When we think of wealth in this denomination, we are not poor, but we are not giving as well. We should not sit around a table limping along about how we can’t take care of our ministries,” he said. “We all have to figure out a way to do what we have the ability to do and encourage people in the field to do the same.”

COGA will hold its next meeting Feb. 12–14, 2020, in Baltimore along with the Presbyterian Mission Agency Board.