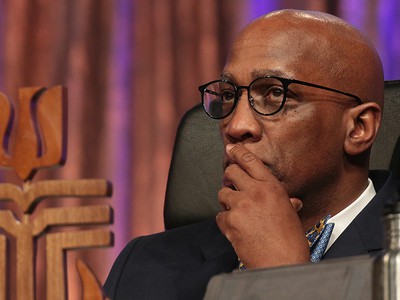 The Stated Clerk of the General Assembly of the Presbyterian Church (U.S.A.) is asking the United States to reconsider its plans to withdraw from the Paris Climate Agreement. The Reverend Dr. J. Herbert Nelson, II is sending a letter this week to U.S. Secretary of State Michael Pompeo.

“The Paris Climate Agreement, joined by nearly every country on earth, serves as a model for cutting the damaging effects of greenhouse gasses and climate change the world over,” the letter reads. “The United States, recognizing our national sin to the world as the second largest contributor to climate changes, should be a leader, not a dissident in this regard.”

Last week, Pompeo officially notified the United Nations that the U.S. would withdraw from the agreement. The detailed process of withdrawal will take a year to complete.

The PC(USA) has long been a proponent of the agreement in which approximately 200 nations have pledged to reduce greenhouse emissions. The signees have also agreed to work with poor countries that have already been impacted by global warming.

“I fear that failure to join the world as leaders and members of one global family, the United States government will not only harm God’s creation now, but for generations to come,” Nelson writes. “I ask for you to reconsider the decision to remove the United States of America from an agreement that works to protect future generations.”

President Donald Trump has long argued that the agreement would hamper the nation’s economic growth and has not supported the argument around global warming.

Ryan Smith, director and representative to the United Nations for the Presbyterian Church (U.S.A.), remarked, “I’m thankful that the Stated Clerk is communicating this concern to Secretary Pompeo. The actions of this administration have serious consequences to the international community as well as future generations of Americans.”

Nelson urged the U.S. to work with other member states and rejoin the agreement.

“We pray that the United States will work towards reforms that make for a safer and sustainable environment and to protect citizens of the world, now and in the future,” he said.