Gregg Brekke | Special to the Office of the General Assembly - November 21, 2019 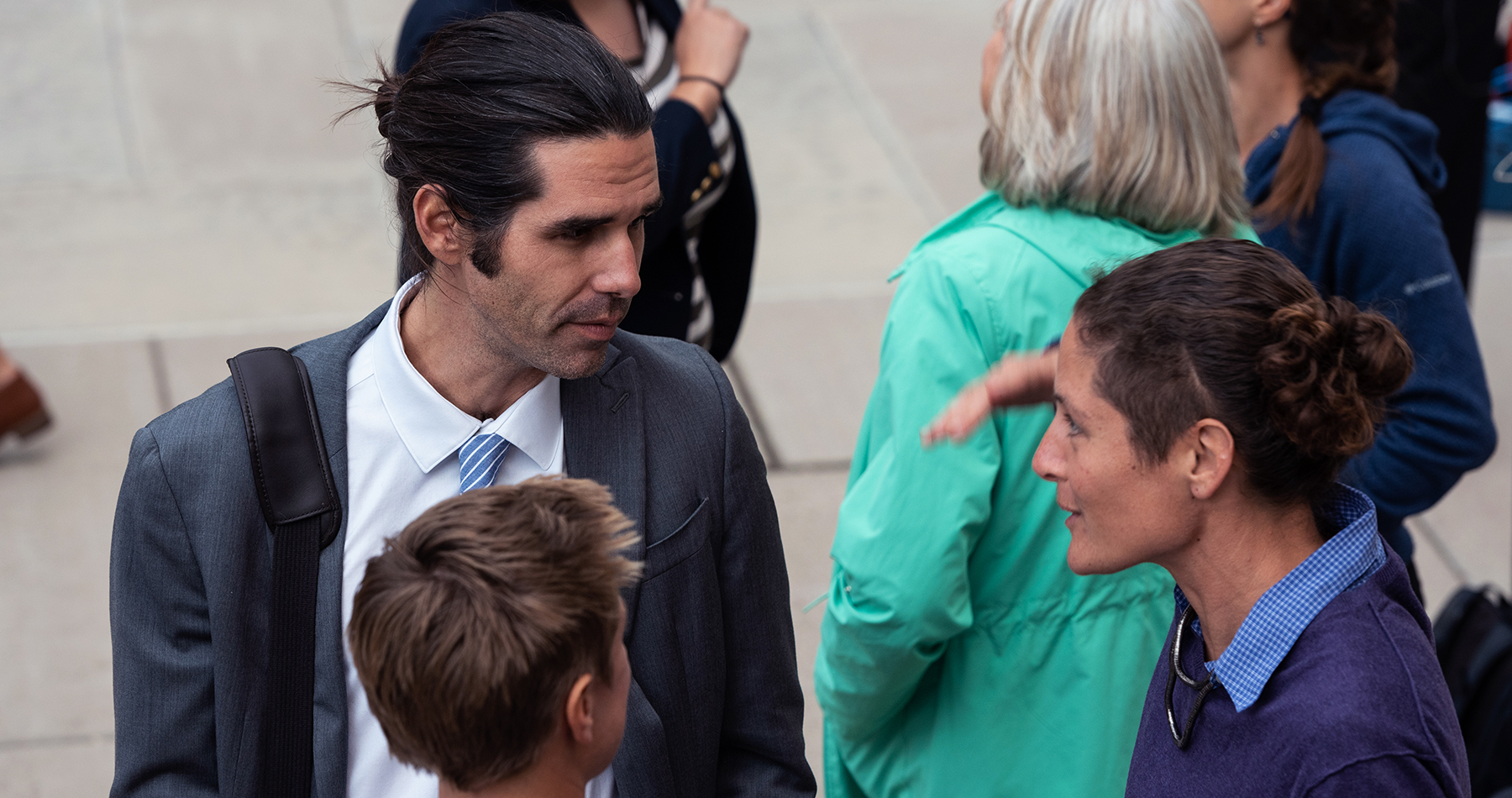 After only two hours of deliberation a jury delivered a not guilty verdict in the retrial of Scott Warren on charges that he harbored undocumented migrants in the Arizona desert in January of 2018. The first trial, which also included one charge of conspiracy to transport or shield undocumented immigrants, ended in a hung jury this past June.

It’s reason to celebrate for advocates like the Rev. Alison Harrington, pastor of Tucson’s Southside Presbyterian Church, and others who have followed Warren’s trials and lobbied for the rights of those administering humanitarian aid along the U.S. and Mexico border. No More Deaths, the organization with which Warren was volunteering when he was arrested, was co-founded by Southside’s former pastor, the Rev. John Fife.

“These days, victories are few and far between,” said Harrington as people gathered to celebrate with Warren outside the courthouse following the verdict. “It feels amazing to have a jury say that humanitarian aid is not a crime, and in fact is a moral obligation. One of the jurors was quoted as saying, ‘the work these folks are doing is fantastic.’ It’s been my privilege to walk with [Warren and his family] through this process.”

More than 150 faith-based advocates held vigil in the early morning hours outside the federal court here – praying, singing and speaking – before lawyers for Warren’s defense and prosecutors for the U.S. Attorney’s office in Arizona made their final remarks to the jury.

At the conclusion of the vigil, a delegation of No More Deaths volunteers was instructed, and a blessing pronounced on them and several gallon-sized jugs of water, by The Rev. Hannah Bonner and the Rev. Bethany Russell-Lowe prior to the group deploying to the desert for another of the organization’s regular water drops.

The remaining attendees then moved into the federal building – many of them wearing clerical garb – to fill the courthouse and hear closing arguments.

Amanda Craft, Manager for Advocacy in the PC(USA) Office of Immigration Issues, was present for these arguments and reported that Warren’s defense attorney, Greg Kuykendall, told the jury they had shown Warren’s intent was to end death and suffering in the desert and that “being a good Samaritan is not against the law. Practicing the Golden Rule is not a felony.”

Warren delivered testimony on Tuesday, the fifth day of the six-day trial, in which he reasserted his desire to neutrally provide humanitarian aid in order to save the lives of injured migrants and that to do more violated the policies of No More Deaths. A key tenet of the defense argument was that the type of assistance and the manner in which it was administered was well within the law. 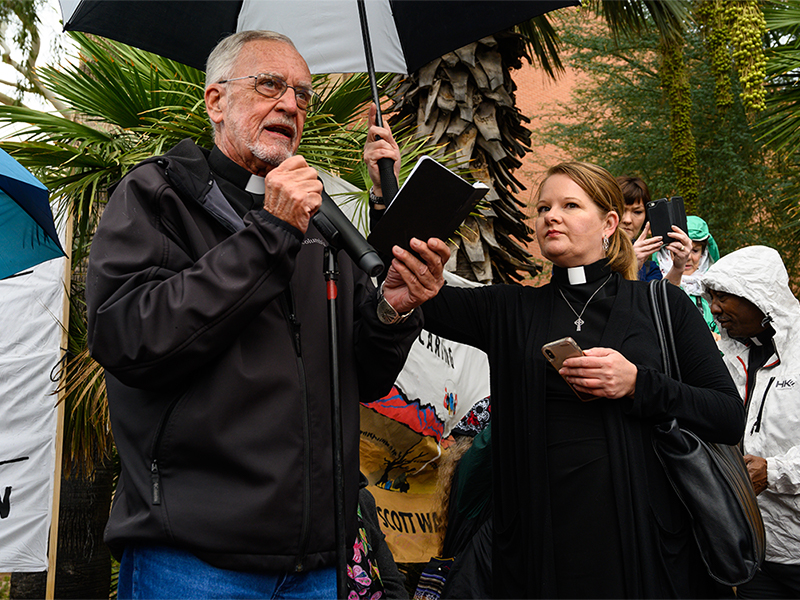 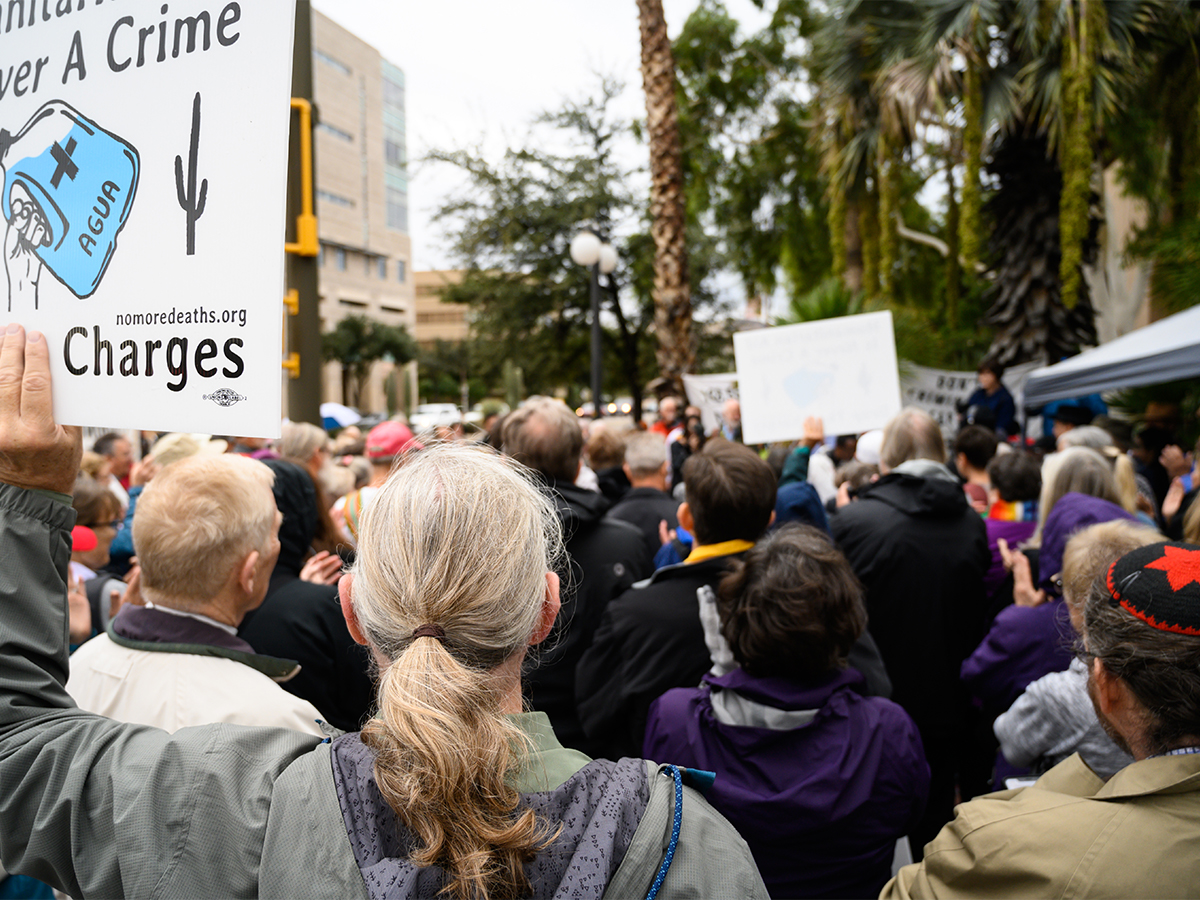 Supporters of Scott Warren march outside of a Tucson courthouse awaiting a verdict. Photo by Gregg Brekke.

Federal prosecutors had asserted Warren hid the two Central American men, Kristian Perez-Villanueva and Jose Arnaldo Sacaria-Goday, for four days and gave them directions on how to avoid Border Patrol checkpoints and patrols once they left the safety of “the Shack,” a resupply shed used by humanitarian groups near Ajo, Arizona.

Prior to the jury’s deliberation, Harrington commended the interfaith delegation that had come in support of Warren’s case, saying, “I think it’s important for people of faith from all over the nation convened here today because what we see in this courthouse is a criminalization of our faith.

“What we see is someone being put on trial for being faithful to what we believe is a core mandate of all our religious traditions – to care for those who are suffering, to welcome the stranger, to love our neighbor, to feed the hungry, give water to the thirsty. All of these values that are so central to who we are as a people of faith are being put on trial here.”

Although acquitted of felony harboring charges, Warren was found guilty of operating a motor vehicle illegally in the desert area near Cabeza Prieta, a common spot for No More Deaths aid activities. U.S. District Judge Raner C. Collins set a Feb. 18, 2020 sentencing date for the illegal driving charge, a misdemeanor with penalties ranging from probation to six months of incarceration.

Gathered with friends, family and supporters at a press conference following the trial, Warren declined requests for interviews but read prepared remarks off his cell phone.

“As we stand here, people’s brothers, sisters, fathers, spouses and children are in the midst of the perilous desert crossing,” he said. “The need for humanitarian aid continues.”

Author: Gregg Brekke | Special to the Office of the General Assembly