Coffee with the Clerk focuses on the Presbyterian Historical Society 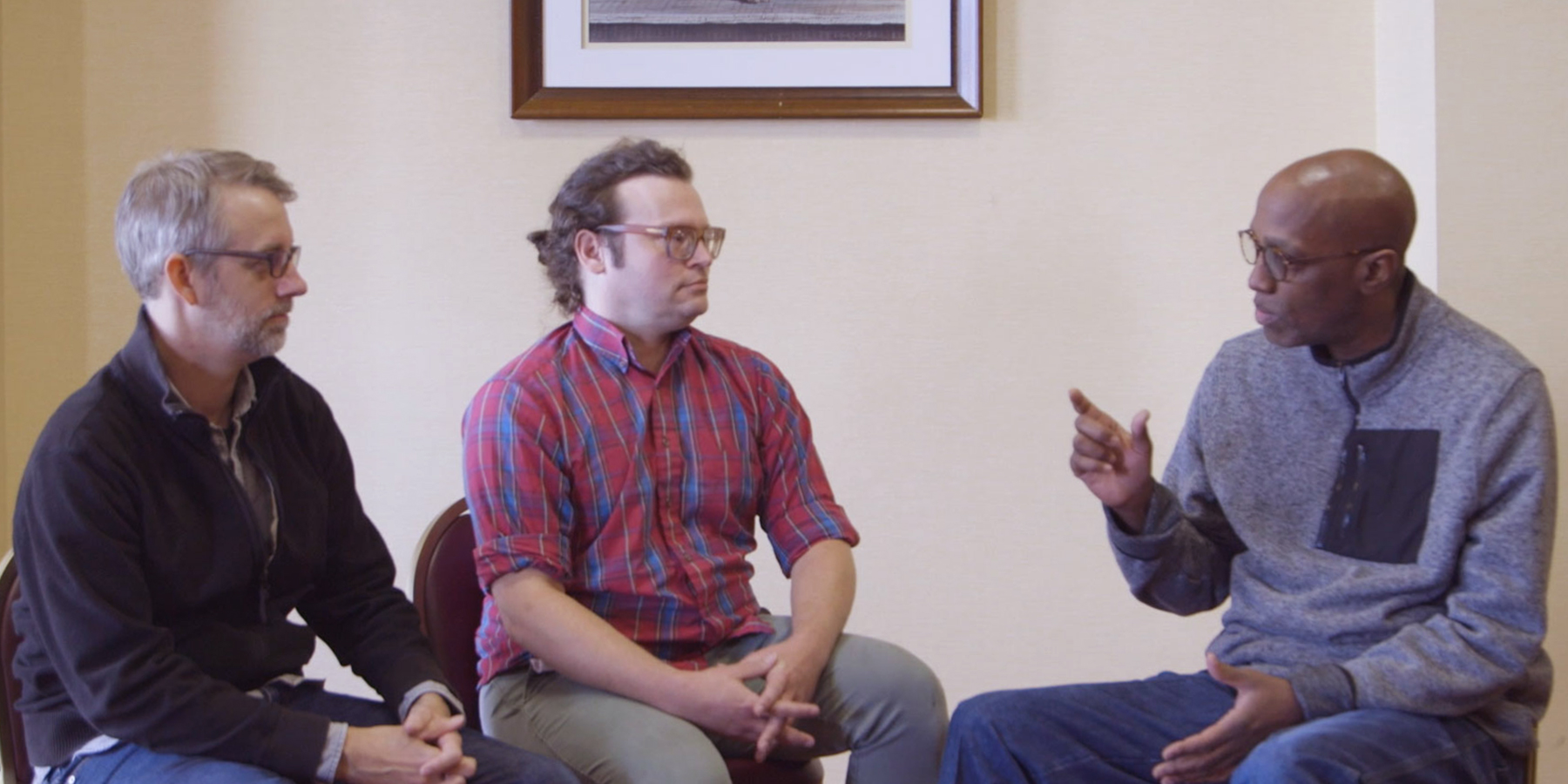 Fred Tangeman (left) and David Staniunas with the Presbyterian Historical Society appear with the Reverend Dr. J. Herbert Nelson, II, on Coffee with the Clerk. Photo by Randy Hobson.

For more than 160 years, the Presbyterian Historical Society (PHS) has been collecting and archiving historical church documents and other items. At its Philadelphia offices, you will find more than 34,000 cubic feet of original records, photographs, church bulletins, minutes, and more.

This week, two members of the PHS staff appeared with the Reverend. Dr. J. Herbert Nelson, II, Stated Clerk of the General Assembly of the Presbyterian Church (U.S.A.), on Coffee with the Clerk, a weekly Facebook Live broadcast.

Fred Tangeman, director of communications and marketing, and David Staniunas, archivist, shared the work they are doing to preserve and capture Presbyterian history.

“One of the aspects of our building, in addition to being the national church archives, is we have, over time, taken in records of other bodies with a strong Presbyterian flavor such as ecumenical groups like the National Council of Churches and Religious News Service, which has an extensive photo library in our holdings,” said Staniunas.

He adds that an ongoing challenge is to ensure the records are properly cared for.

“The greatest challenge is about collections that are not yet in the building. This is common to all archives. There’s a self-selection among people who believe themselves to be important enough to be archived,” he said. “Archives over- collect from those people and under-collect from marginalized, racialized and underrepresented people. If we do not re-dedicate ourselves to the task of seeking out the people who are not represented in the stacks, that’s the greatest threat to collections overall; not fire, not flood, but failing to bear witness is the greatest threat.”

Tangeman says another challenge is to connect people with the items the historical society has collected.

“You can have the greatest collection of materials in the world that are of interest to Presbyterians or those interested in American religious history, but if you are not sharing materials and bringing people into the building to use them, those materials are not as valued as they could be,” he said.

Nelson says there are likely hundreds of historical documents that are still sitting on shelves or in boxes.

“African American congregations may have documents that were housed in an old building that date back to the 1800s, but may have been lost when they moved to a new building, or were destroyed by fire,” he said. “Another scenario is where a grandmother dies, and she kept records in her house. Grown children come and begin to purge and that box of church bulletins and other items may not have the value to the family and may end up in the trash.”

Tangeman says PHS is dedicated to identifying, selecting, and bringing in historical records from African American congregations as well as collections on the LGBTQ+ struggles.

“We’ve begun the Pam Byers Memorial Fund initiative and have been working for two years to bring in resources around that community’s experience and the history of the church with its progression toward full ordination rights for LGBTQ+ peoples,” he said. “This is not an organization that is just collecting materials. It’s also going out and finding those records and stories that Presbyterians are interested in and also have great relevance where Presbyterians find themselves in the larger American historical context.”

“The LGBTQ+ struggle was a long, hard fight and not only a glorious moment when the day came, it represented a new openness in the life of the denomination,” said Nelson. “Those are the kinds of things in the life of the denomination that are being captured by PHS at this moment, and it becomes an opportunity to do real teaching and training. Scholars are coming in to utilize these archives.”

Tangeman says PHS has developed a partnership with local community colleges in Philadelphia to draw more students into the building.

“That program is another way of using materials collected and giving them a new life and relevance. We have always been a draw for academics, scholars, Presbyterians, people in churches and mid councils that write community histories,” he said. “Because of the history of Presbyterian engagement on a number of social issues, community college students are able to study civil rights, western migration, and issues of immigration through holdings at PHS.”

The historical society has also been working the past two years to collect historical documents from Puerto Rican churches.

“Until 2018, we did not have records created by and for Puerto Rican Presbyterians,” said Staniunas. “With the election of Vilmarie Cintrón-Olivieri as the first Moderator from Puerto Rico and with the devastation of Hurricane Maria, we started fielding calls from people asking what we were doing to make sure this part of history isn’t lost.”

“We received amazing help from the Puerto Rican community that has allowed us to do right for those records, provide support that works for the communities, and it has been a wonderful experience and an important thing for archivists to acknowledge,” said Tangeman. “Archivists have certain capacities and gifts, but they lean on experiences of people in the wider world to do the work, collect items that are hugely important and provide that historical narrative.”

The Stated Clerk’s entire interview on the work of PHS can be viewed here.