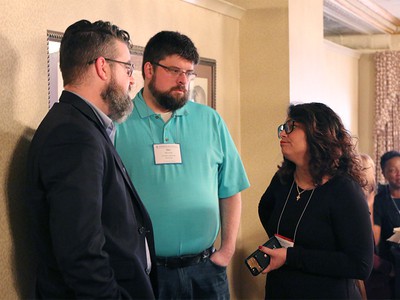 The Reverend Chris McCurdy (left) and his brother, the Reverend Dan McCurdy (right), converse with Ruling Elder Vilmarie Cintrón-Olivieri, Co-Moderator of the 223rd General Assembly (2018) during the recent Moderators’ Conference in Louisville. —Photo by Rick Jones.

It’s not unusual for family members to serve the same church or even the same presbytery. But you rarely hear of siblings serving as moderators at the same time in different presbyteries. That’s the case for the brothers McCurdy.

The Reverend Dan McCurdy has been pastor of the First Presbyterian Church of Weyauwega, Wisconsin, since 2013. Now he is preparing to take on the additional role as moderator for the Winnebago Presbytery in the Synod of Lakes and Prairies in the northeastern part of the state.

His older brother, Chris, is pastor at United Presbyterian Church in Rice Lake, Wisconsin. He also serves as moderator for the Presbytery of Northern Waters, next door to Dan.

“I’ve run into siblings in the ministry before, but this is the first I’ve ever heard of two brothers moderating two different presbyteries at the same time,” said Dan. “It has certainly raised some eyebrows around here.”

Serving in the Presbyterian Church (U.S.A.) is a family matter for the McCurdys. Their father and Dan’s wife are also ordained Presbyterian ministers.

“There was a time when the four McCurdys — my brother’s wife, Rose, my father, brother, and I — were all attending Columbia Theological Seminary at the same time,” said Chris. “We have unique relationships develop because people may not know us, but they know people we’re related to. It’s nice to go to different Presbyterian functions and people ask if I know Rose McCurdy and I say, ‘Yeah, she’s my sister-in-law.’”

Both brothers are tall, sporting long, dark beards. But despite the similarities, no one has been confused and called them by the other’s name yet. Dan and Chris agree that having the family connection in ministry has its benefits, especially when facing ministry burnout or challenges.

“I can call people in my family and get honest reactions and explanations of what they did in similar situations,” said Chris. “I feel the moderator role offers its own challenges, stresses, and joys, and I know who to share them with. I may not know what to do with a certain problem, but I know I can call Dan and see what he’s done. I may not take his answers exactly, but I know he understands what I’m going through and is praying for me and I’m praying for him.”

Dan says if he comes up with a problem in ministry, he’s confident what his father, wife, and brother would do — and they always find opportunities to share their thoughts.

“When we talk about things going on in our church, we are all passionate people and sometimes we get in conversation and have a fun and animated Thanksgiving debate,” he said. “Having that core of knowledge between the four of us has been fantastic and we always look forward to the process. Chris has experience as moderator and being able to draw on his experience will be a great gift in this new role.”

The brothers agree that having family members in the ministry gives them an opportunity to “be real with each other.”

“Sometime when ministers connect, no one wants to be the real person first. It’s not that way amongst the family,” said Chris. “We know where others would struggle in certain situations and where others would be better and being able to cut through all of the posturing and know this is who we are and what I feel and need to follow is extremely helpful. There are no errors. You can get honest answers.”

The brothers feel they are where God has called them to serve, but they say they are always listening to see if God has other plans.

“I’ve always had this perspective of the two of us growing up in church, having this unique look of pastor kids. I always thought that Chris would end up in charge of something, that’s his personality, and my wife is vice moderator of the Presbyterian Mental Health Network,” said Dan. “For me, I’ve always seen myself slightly smaller in scope. I think I will always be a church pastor. But getting involved in national church functions like the Moderators’ Conference, actually builds my energy.”

“In my career, I’ve always been extremely locally focused and served on a presbytery committee. I’ve never had any thoughts or ambitions about moving up,” said Chris. “I’ve watched my brother and sister-in-law, and taking on the role of moderator has opened my eyes. There are no plans or thoughts, but it has broadened what I’m looking at. I see myself looking for what can happen instead of focusing totally on what I’m currently doing.”

Dan and Chris were in Louisville last month for the Moderators’ Conference and both say they are enjoying the chance to serve at the same time.