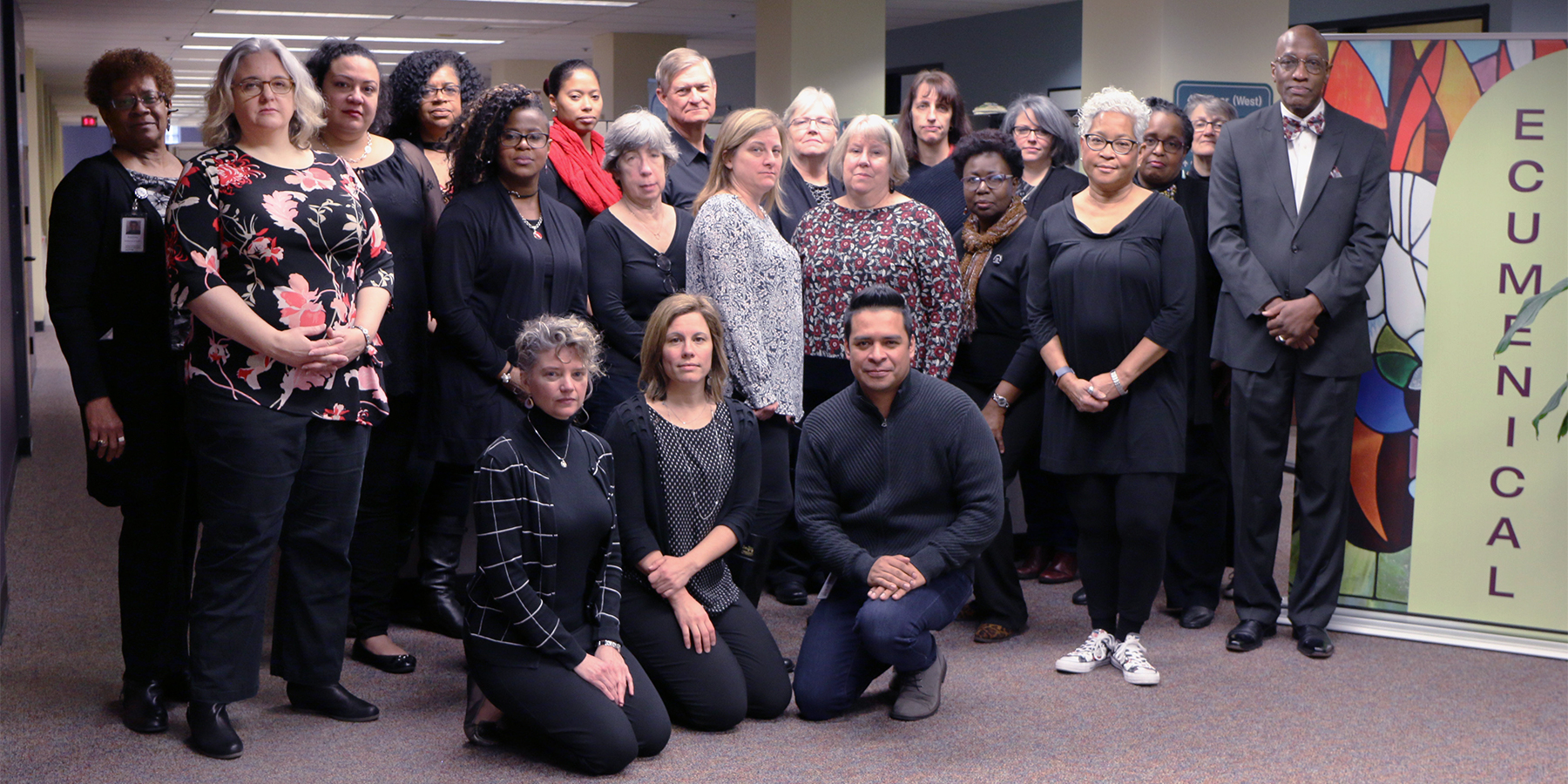 Office of the General Assembly staff dress in black to commemorate the “Thursdays in Black Campaign” to raise awareness of the abuse of women. Photo by Randy Hobson.

Love is patient; love is kind; love is not envious or boastful or arrogant or rude. It does not insist on its own way; it is not irritable or resentful; it does not rejoice in wrongdoing, but rejoices in the truth. It bears all things, believes all things, hopes all things, endures all things.     1 Corinthians 13: 4–7

On a day that represents a celebration of love, you’ll find most people wearing red to commemorate. But for the Presbyterian Church (U.S.A.)’s Office of the General Assembly, the color to wear for Valentine’s Day this year is black.

Staff members are participating in the Thursdays in Black Campaign, organized by the World Council of Churches (WCC), to raise awareness about violence against women and children. The campaign grew out of the WCC’s Decade of Churches in Solidarity with Women after hearing countless stories of abuse around the world from the battlefield to homes and businesses.

In a recent article for WCC, the Reverend Robina Winbush, Associate Stated Clerk and director of Ecumenical Relations for the Office of the General Assembly, wrote that Jesus commanded the disciples to “love God with everything you have.”

“Yet, in the name of this God who is love, people have captured, enslaved, trafficked, raped, sold, beat others who have been deemed as ‘less than’ or ‘other than’ and subjugated people to selfish economic and sadistic desires,” she writes. “In the name of love, people have done unspeakable violence to the very ones they are called to care for and protect. This brokenness in relationships with each other and with creation becomes a betrayal of the very essence of God whom we claim to love, worship, and follow.”

According to the World Health Organization (WHO):

Winbush says the scripture from Corinthians is often read at weddings and reduced to interpersonal relationships. She says its original context is for a community to heal the brokenness and wounds we intentionally and unintentionally inflict on one another.

“When relationships (both interpersonal and collective) are abusive, controlling, narcissistic, and sadistic, they are not relationships marked by the very essence of God—LOVE,” she said. “These relationships hurt and wound—they kill and destroy. They are a distortion and perversion of God’s intention for us.”

The World Council of Churches advocates for the rights and well-being of vulnerable communities globally, particularly women and girls. The Thursdays in Black campaign is designed to bring attention to the experience of women who are abused and violated and develop healthy relationships that value each person as made in the image of God.

“On a day in which we ‘celebrate’ love, we are mindful that too many relationships are marked by abuse and violence—a ‘love’ that hurts,” said Winbush. “Today, the World Council of Churches and the ecumenical family invite us to celebrate love that heals the wounds of our lives and our world. With a beloved family of faith throughout the world, we join in proclaiming, ‘Love Heals, Not Hurts.’ May this be our prayer and our works commitment today and every day.”

The WCC offers additional reflections on the Thursdays in Black Campaign.