Home News PC(USA) aims to do unto Louisville what it did in St. Louis: stand against cash bail

PC(USA) aims to do unto Louisville what it did in St. Louis: stand against cash bail 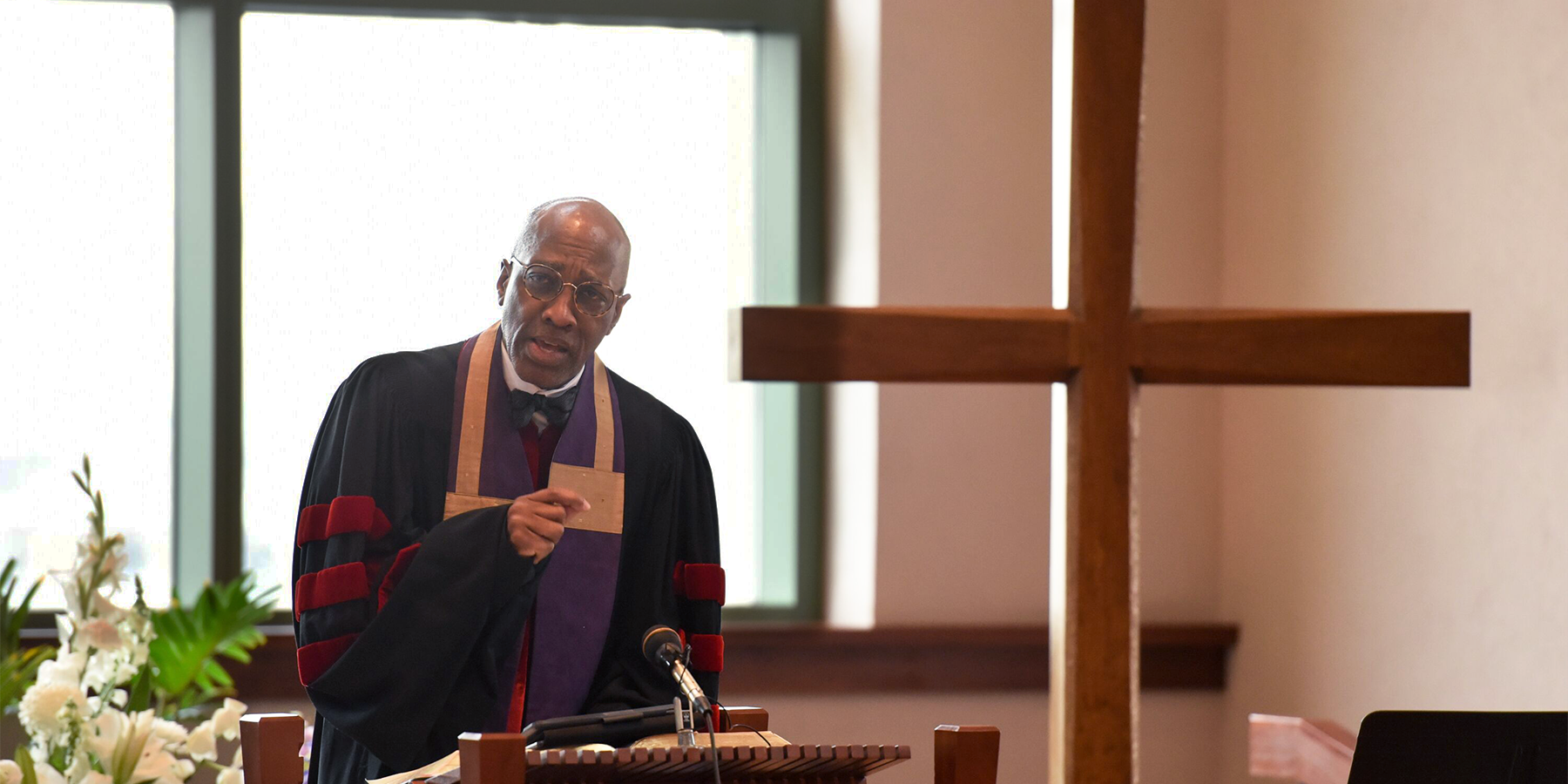 With the mighty Ohio river as his backdrop, the Rev. Dr. J. Herbert Nelson took the congregation back 31 years ago, when the Presbyterian Church U.S.A. accepted an invitation to move its national offices to Louisville.

“Louisville said, ‘I’ll give you a building, down by the riverside, if you just come and you are the anchor building and anchor organization to make this city live again,” recalled Nelson, Stated Clerk of the General Assembly of the PC(USA).

Nelson reflected on the exponential growth in Kentucky’s largest city, since the PC(USA) came to be that anchor, including a downtown baseball stadium, sports and concert arena, convention center and a hotel, all springing up in the ensuing three decades.

Wednesday morning, at a chapel service and open event at the Presbyterian Center, Nelson was there to answer: Join in a movement to end cash bail in the city.

“Women and men are arrested each day for misdemeanor crimes in big cities and small towns all across this country and treated by the legal system as though they committed capital crimes,” Nelson preached.

During the morning’s events, Nelson and others spelled out the problem: People are often arrested for minor offenses such as urinating on the sidewalk and then held in jail for what can amount to sentences in their own rights because they and their families cannot afford the hundreds or even thousands of dollars needed to post bail. While in jail, these people are away from their families, their jobs, and their best chances to build a defense, Shameka Parrish-Wright, site manager for Bail Project Louisville said at a post-worship event in the Presbyterian Center atrium. 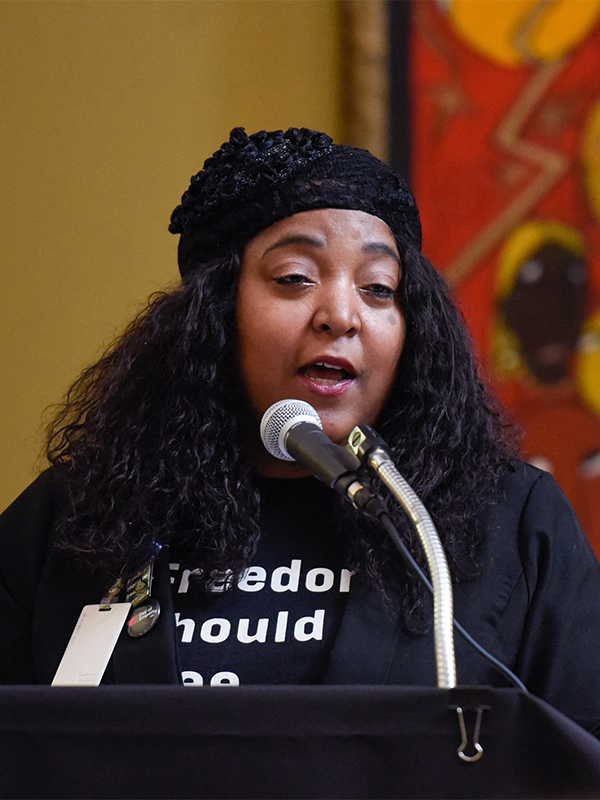 It is a system she and others say weighs particularly hard on the poor and people of color.

“This is truly a ‘What Would Jesus Do?’ issue,” Parrish-Wright said. “People need a chance. Our society says you’re innocent until proven guilty, but our justice system does not reflect that.”

She and others also made the point that many municipalities build their budgets with bail funds already built in. That and for-profit jails and prisons, they said, incentivizes arresting and incarcerating people to meet budgets and quotas.

“Bail is one of the greatest examples of institutional oppression in this country,” Louisville Metro Council District 4 representative Barbara Sexton Smith said at the post-worship event.

Also at the event was Raoul Cunningham of the Louisville NAACP, who said, “You are not convicted, yet you are incarcerated – removed from your family, removed from your job. It’s an injustice. It’s a civil rights issue, and we are glad to partner with the church.” 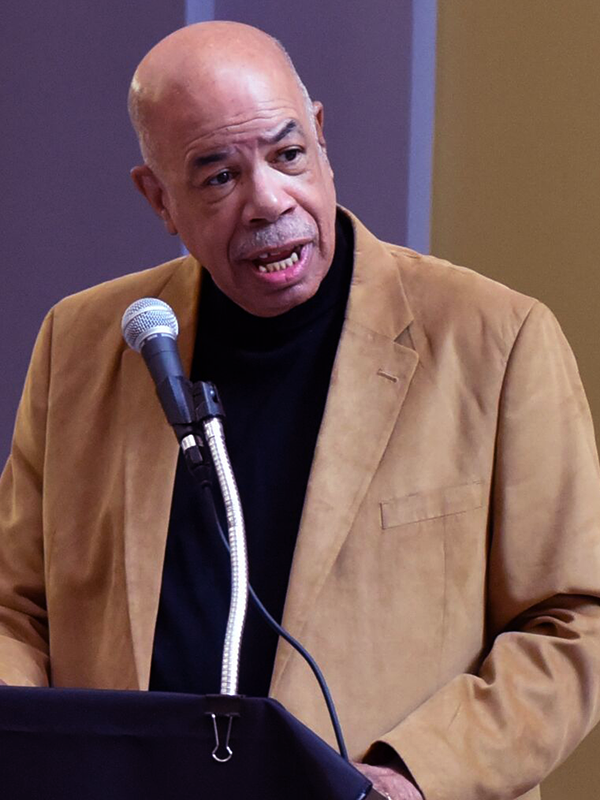 Raoul Cunningham of the Louisville NAACP, speaks at a rally at the Presbyterian Center. Photo by Rich Copley.

The Presbyterian Center will be the launch point for a planned June 6 march to the Louisville metro corrections center, where participants will aim to bail out many people accused of non-violent offenses.

It will be similar to a march Nelson and church leaders led last summer at the 223rd General Assembly in St. Louis. There, Nelson said, he got an education.

With General Assembly, Nelson said the church was proud of the economic impact it was going to make on the city and wanted to join in protesting the killing of Michael Brown, an 18-year-old in neighboring Ferguson who was shot to death by a Ferguson police officer in 2014. But people in the city said that was not what they needed.

“We learned more than we taught,” Nelson said. “Those folks from the street said, if we are going to engage in a march with you, you have to hear our cry. If there was going to be a march with that community, it was going to be with those people we were sitting in the room with, who came from the humble places of the community.”

And the issue they said was weighing on them was cash bail, and the burden it was, the barrier it represented.

“There is something about who we are that demands we get engaged with the lowly, the poor, the damned and dejected, not just outside of this country, but in our own city – in this city,” Nelson said.

“It is not just about a jail cell, it’s not just about incarceration,” Nelson said. “It is about the systemic denial, denial of the presence of evil that keeps people God intended for good from being what God intends.

“We as a church 30-plus years in this city have a responsibility … to be a good neighbor to the last, the least, the lowly, the despised, the dejected and the damned. Why? Because that’s our calling.”

And it’s a calling that goes beyond Louisville. Nelson recounted end-cash-bail efforts in Florida and Virginia that emerged after last year’s General Assembly and said it is a movement Presbyterians should get behind nationwide. He noted that there will be opposition, particularly from those with vested interests in the status quo. But he exhorted participants in Wednesday’s events to remain strong.

“We have a challenge before us,” Nelson said. “But I am convinced the God of Eternity is at work now, as we begin.”