Presbyterian Church (U.S.A.) and other denominations oppose Israeli annexation of the Golan Heights

Group calls it a “reversal of consistent U.S. policy” 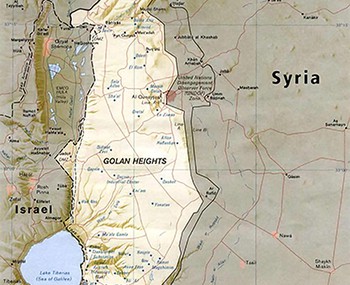 The Presbyterian Church (U.S.A.) has joined other Christian denominations in rejecting President Donald Trump’s decision to recognize Israeli annexation of the Golan Heights. In a statement released this week, churches say they are concerned about the administration’s disregard for international law.

“We see this reversal of consistent U.S. policy and international consensus – that the Golan Heights are occupied and were acquired by force in the 1967 War in contravention of international norms – as an abandonment by the U.S. of diplomacy to resolve such issues,” the statement reads.

The churches also believe the White House’s approach to Israel/Palestine shows an unwillingness to consider the implications theses actions will have on efforts to reach peace in the region. The churches add they are also concerned for the future of West Bank territory, also occupied by Israel.

US Churches and Christian organizations reject President Trump’s
recognition of Israeli annexation of the Golan Heights
A statement issued March 28, 2019

This past Thursday, March 21, President Trump announced that the United States would recognize Israeli annexation and sovereignty over the Golan Heights. As US-based churches and Christian organizations with long histories of engagement in the Middle East through mission and ecclesial relations, we fully reject this unilateral declaration and are especially concerned about this Administration’s disregard for international law. We see this reversal of consistent US policy and international consensus—that the Golan Heights are occupied and were acquired by force in the 1967 War in contravention of international norms—as an abandonment by the US of diplomacy to resolve such issues.

We have witnessed the Trump Administration’s approach to the Israel/Palestine over the past two years, and see this step as a continuation of the White House’s unwillingness to consider the implications of such actions for the possibility of a peaceful and just resolution to the region’s conflicts. The President’s recognition of Israeli annexation of the Golan Heights is similar in nature to his recognition of Israel’s claims over all of Jerusalem, both of which ignore the legitimate claims of Syria and Palestinians, respectively, despite Israel’s 1980-81 legislative actions claiming jurisdiction and administration over each of those geographies. These shifts in US rhetoric contravene United Nations rejection of Israeli claims and the acquisition of territory by force. We are further concerned that such a pattern does not bode well for the future of West Bank territory, also occupied by Israel. And we wonder about the timing of this announcement.

We recognize that, just because the US says it is so does not make it so, but we also acknowledge the disproportionate influence that US policy has in the region, and how US policies have not led to a just and peaceful resolution to the conflicts there. We urge the US to recommit to meaningful negotiations at appropriate times to resolve such matters based on international law and conventions, to involve all appropriate parties, to reject such unilateral actions by one party, and to refrain from making foreign policy statements that would unduly prejudice the outcomes of such diplomacy.

We also urge the US to support appropriate diplomatic efforts to resolve the crisis in Syria, which has led to more than half a million deaths and more than half the population being displaced. We recognize that negotiations over the possible return of the Golan Heights to Syria are not practicable at this time of uncertainty—all the more reason for the US to refrain from making such harmful declarations.