The Rev. Dr. Diane Moffett extends the invitation churchwide during “Coffee with the Clerk” 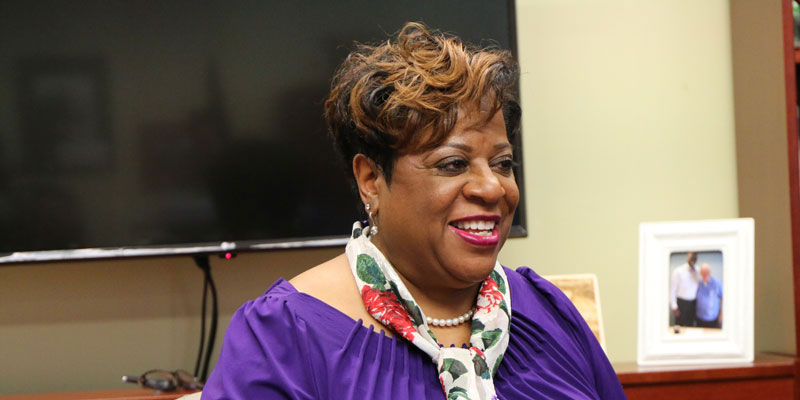 While unable to be everywhere at once, the Rev. Dr. Diane Moffett — through the miracle of tape delay — came close on Monday, the first day of the Matthew 25 Invitation.

Moffett, president and executive director of the Presbyterian Mission Agency, appeared on a pre-recorded Facebook Live broadcast of “Coffee with the Clerk,” the weekly talk show hosted by the Rev. Dr. J. Herbert Nelson, II, Stated Clerk of the General Assembly of the Presbyterian Church (U.S.A.).

“We are being reshaped and renewed, and that can be difficult for people who are vested in the past,” Moffett told Nelson. “It can be a struggle to let go and move into the new thing that God is doing right now.”

The Matthew 25 Invitation asks congregations and mid councils to identify themselves as working toward one or more of three goals: building congregational vitality, dismantling structural racism and eradicating systemic poverty.

“We’ve got to trust God and give ourselves the privilege of failing,” Moffett said of the churchwide work the invitation calls for. “Try it,” she suggested. “If it doesn’t work, then we know we need to pick it up and refine it.”

Presbyterians have spent decades looking at poverty and racism, she noted. “We’ve got to do a self-critique to say what’s working and move beyond some of the places we have been,” she said.

“That enabled us to march (during the 2018 General Assembly in St. Louis), advocate for laws that need to be changed and offer compassion for people dealing with these things,” Moffett said. She called the Hands and Feet Initiative “a tangible way to get there” (to the Matthew 25 vision that General Assembly first had for the church in 2016).

Nelson had this response: “I think we learned in St. Louis that communities have to make decisions for themselves about what will be the work in front of them.”

The Matthew 25 Invitation looks at repairing the system and making it more just, rather than focusing on individual acts of compassion.

In the latter part of Matthew 25, “Jesus is critiquing the nations, which I believe is for all of us,” Moffett said. “We blame the victim or try to fix people when we need to fix the system. People are in the system, and they can tell you what they’re dealing with.”

Or, as Nelson put it, “We who have the privilege of benefiting from a system don’t question the impact it has on people. Who then becomes the naked and the hungry? I may live in a community and attend a church that takes me away from all that. We don’t look at systems we don’t operate in.”

Moffett called verses 31-46 of Matthew 25 — the judgment of the nations — “the biblical foundation by which we do this work. It allows us to empty ourselves in service to God and God’s people. We understand our call to follow Jesus means getting actively involved in the world.”

Nelson said he and Moffett “are very much in communion with one another in regards to how this (invitation) plays out.” He called it “a false argument” that his work focuses on justice while her focus is mission.