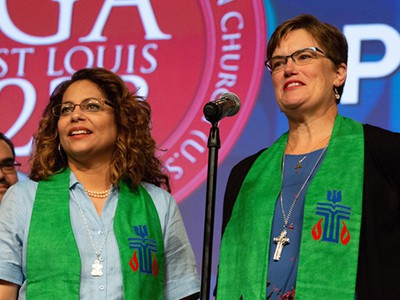 Regarding the appointment of the Jarvie Commonweal Endowment Reconciliation Team, the Co-Moderators, Ruling Elder Cintrón-Olivieri and Rev. Kohlmann, expressed the following:

“We understand these have been difficult months of waiting, and appreciate the patience and prayers as no process of this kind is done without plenty of prayer and discernment as well as the support of the office. This task was not taken lightly. Since the beginning of the process, the pool of people nominated or self-nominated for this particular team was very small and homogeneous, and, even after months of efforts in widening the pool, it remained as such. The Co-Moderators completed the list of members and finally appointed the team when there was a balance of expertise and skills, as well as appropriate representation. Because this team will be looking at different sides of a conflict, balance in the members is of utmost importance. Now that the appointment has been completed, we trust the Holy Spirit, already at work, will lead this group of volunteers that have placed their hearts and skills in the service of God and the church. We trust that you join us in continuing to pray for reconciliation and a new way forward.”

Further information on the membership of each of these groups may be found here.

The General Assembly Co-Moderators hope to announce soon the appointment of persons to the Special Committee to Develop a Letter to Accompany the Confession of Belhar and Task Force for the Decade of Intercultural Transformation. We continue to work on developing a diverse pool of applicants from which these appointments may be made. For more information, please contact Valerie Izumi.