The committee to meet jointly with Presbyterian Historical Society Board

Rev. Frank Clark Spencer, president of the Board of Pensions, brings greetings to members of the Committee on the Office of the General Assembly and Presbyterian Historical Society Board of Directors - Rick Jones

Members of the Presbyterian Church (U.S.A.)’s Committee on the Office of the General Assembly (COGA) have gathered in Philadelphia this week for its spring meeting. Part of the agenda includes meeting jointly with the Presbyterian Historical Society Board of Directors.

The two groups gathered Tuesday morning at the offices of the Board of Pensions for cultural proficiency training, led by the Rev. Molly Casteel, manager for equity and representation for the Office of the General Assembly and Vanessa Julye, racism program coordinator for Friends General Conference.

During its regular meeting, COGA heard from the Rev. Cindy Kohlmann and Ruling Elder Vilmarie Cintrón-Olivieri, Co-Moderators of the 223rd General Assembly (2018), with an update on their work and travels since the February meeting. Cintron-Olivieri discussed the recent visit with a PC(USA) delegation to the Middle East. The delegation responded to a General Assembly mandate to show solidarity with the people who are suffering in Gaza.

“One of the things I remember is talking with our Palestinian siblings who were preparing for a time when they will be free,” she said. “We saw art work at Dar al-Kalima Lutheran School, where a whole new generation of artists and professionals are telling their story. But our prayers aren’t enough. We need to share what we saw.” 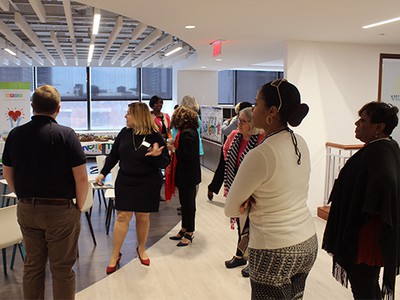 Kerry Rice, deputy stated clerk for the Office of the General Assembly, updated committee members on the agency’s ecumenical work in lieu of Robina Winbush’s passing. Winbush, director of Ecumenical Relations, died in March upon returning from the Middle East. Rice told the group that the Stated Clerk does not plan to rush the decision about a replacement.

“It is a difficult position to fill. Robina’s longevity in that work and her reach across the ecumenical movement is far and wide,” said Rice. “The Stated Clerk’s plan is to determine how to best position ecumenical witness and what is needed to lead that effort.”

Rice says the ecumenical community has been invited to Louisville for a memorial service and conversation, May 30-June 1. The events will be organized around the themes of remembrance, legacy and call.

COGA received an update on the work of the Presbyterian Church (U.S.A.), A Corporation (A-Corp) from board co-chair Bridget-Anne Hampden. She said the board has been focusing on finding a president and building on the work of Mike Miller, the acting chief financial officer who died suddenly in March following a heart attack.

“We lost the glue and the rock in administrative services, a man with a heart of gold,” said Hampden. “We are still trying to find the new normal and chart the course forward.”

“We will be very bold in our progress and there will be a change by the next General Assembly and it will be very empowering,” she said. “We’re moving ahead to identify someone to head that group and how best to begin the effort. We have to be strategic in what we can tackle in order to have tangible success in 2020.”

COGA also heard an update on the Matthew 25 movement, announced recently by the Rev. Dr. Diane Moffett, president and executive director of the Presbyterian Mission Agency. Matthew 25 is an invitation to large and small churches to engage with the world and serve people who are oppressed, hungry or poor. Moffett told the committee it’s not just a mission agency project.

“It really is a Presbyterian effort to bring us together to tell the stories and celebrate the ministries that are doing the good work,” she said. “Wherever we are, we believe this is our call and we believe it gives us an organized principle to do ministry.”

COGA members expressed enthusiasm for Matthew 25 and encouraged churches to get connected.

“This is catching on fire and I believe it is a God thing that captures something for the whole church to move forward that will unite us with a biblical foundation,” said Warren Lesane, COGA member. “As I read and heard more about it, I’ve become one of its greatest advocates.”

The meetings continue on Wednesday at the Presbyterian Historical Society and will wrap up at midday Thursday.

Tags: board of pensions, coga, committee on the office of the general assembly, diane moffett, matthew 25, phs, presbyterian historical society