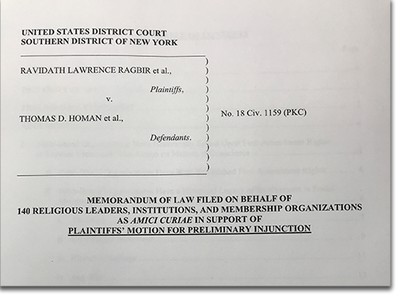 Immigration activist Ravi Ragbir won a significant victory recently in the continuing legal battle over efforts to have him deported. The 2nd Circuit Court of Appeals in Manhattan ordered a lower court to consider whether his First Amendment rights can prevent U.S. Immigration and Customs Enforcement (ICE) from focusing on deportation as retaliation for free speech.

Ragbir has lobbied extensively over the years for immigrants’ rights and has been very vocal in his opposition to ICE efforts to deport individuals and families.

The Reverend Dr. J. Herbert Nelson, II, Stated Clerk of the General Assembly of the Presbyterian Church (U.S.A.), is among Ragbir’s supporters.

“The PC(USA) has long stood by immigrants as they strive to keep their families together. Many have taken part in Ravi’s work in New York to help so many people,” said Nelson. “I’m glad we can stand alongside them in this battle and we pray God will change the hearts of those who seek to prevent these families from starting a new life without fear.”

In March 2018, the Knight Institute and Georgetown Law’s Institute for Constitutional Advocacy and Protection (ICAP) filed an amicus brief seeking to stop the deportation of immigrants currently residing in the U.S. The group argued that ICE was trying to silence freedom of speech by targeting immigrants who speak out publicly against U.S. policy on the issue.

Nelson was among a group of American religious leaders, including priests, rabbis, imams, and eight Presbyterian pastors, who signed on in support.

“Our recent and historic commitment to immigration reform has been demonstrated by our Office of Immigration Issues. We have labored by our presence on the ground and a commitment to engage these issues in the courts when needed,” said Nelson. “We truly believe this is God’s will for Christians and other religious groups, to engage and demonstrate the love and communal nature by which God has called us.”

Ragbir, who left his home in Trinidad 25 years ago, has a 2001 wire fraud conviction on his record, making him eligible for deportation. After his release from immigration detention in 2008, he was deemed to not be high risk and allowed to remain in the U.S. under orders of supervision. This provisional status was renewed year after year. But Ragbir became a highly visible activist on immigration and has publicly criticized ICE. He co-founded the New Sanctuary Coalition of New York City, which sends volunteers to accompany immigrants to court dates and ICE check-in appointments. Ragbir and advocates in the NYC faith community believe this change in treatment by ICE is due to his activism and not any change in his immigration case.

He has continued to advocate outside of ICE offices and the Department of Justice immigration courts in Manhattan and has held weekly prayer vigils, known as “Jericho Walks,” with religious leaders.

In its opinion, the court states, “We note that, while Ragbir states a claim in his complaint and attachments, it does not necessarily follow that even if he proves that the officials sought to remove him as a result of his First Amendment speech, he may never be removed. But, at least for the near future, the taint of the unconstitutional conduct could preclude removal.”

If upheld, he would have to leave behind a wife and daughter who currently reside in Brooklyn.