Home News Conversation with the Co-Moderator

Conversation with the Co-Moderator

It’s graduation time for colleges, universities, and seminaries all over the country. For a small group of students at San Francisco Theological Seminary last week, it was also an opportunity to sit down for an informal chat with the Reverend Cindy Kohlmann, Co-Moderator of the 223rd General Assembly (2018) of the Presbyterian Church (U.S.A.).

Several were preparing to graduate, while others had completed their first year. All had a series of questions for Kohlmann ranging from study suggestions to seeking that first pastorate. Kohlmann shared her own journey from seminary to her current role with the national church.

“Because God is creative, God surprises us. I’ve been open to being surprised in my call. I’ve ended up experiencing things I would not have expected,” she said. “There are so many ways to serve God and being in a worshiping community is one of them.”

One student asked if Kohlmann believed the PC(USA) was becoming more inclusive.

“We just elected two sets of female Co-Moderators back-to-back. I’m fairly certain we’ve never had women Moderators one after the other. And in both of those cases, it’s not just white women,” she said. “But we still have a long way to go. We are working hard to ensure women’s voices and presence are heard and seen. We have great support in church for women leaders, especially women of color.” 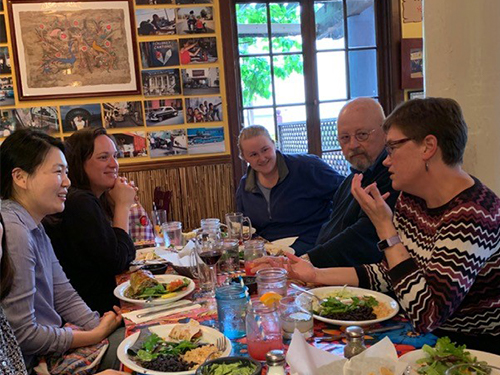 Several students and staff of San Francisco Theological Seminary continued the conversation with the Rev. Cindy Kohlmann over a meal. Photo by Scott Clark.

Kohlmann told the group that infighting within the church on both sides has left deep wounds in the body of Christ.

“My hope is that we can understand how to live in the body of Christ. We don’t have to agree on everything and there can be substantial differences around such things as gender and orientation. But we should disagree in a way that is based on love, not on the need to be right,” she said. “I want us to be a denomination where we can sit at the table and know that a broad spectrum of humanity is there and welcome, respected and heard. Our country, our world, and our communities need that now. We are so deeply divided and that division causes harm every day.”

Kohlmann also encouraged the students to find support among their colleagues in ministry, saying that the support network can have a great impact on self-care in ministry.

“A year-and-a-half into my first call, I realized I needed someone as a friend to help me along the way. I thought that if I needed it, someone else needed it too. So, I reached out to another woman in the presbytery, pastoring a church an hour-and-a-half away. We met weekly for four-and-a-half years,” she said. “We read books together and talked about families. If I had not reached out to her, I’m not sure I’d still be in ministry. It is essential.”

Kohlmann referred to Jesus surrounding himself with an inner circle of friends that he relied on. That led one of the students to recommend to the seminary chaplain, the Reverend Scott Clark, to help organize a regular gathering of Presbyterian students as the disciples did.

The Co-Moderator was asked if she had any advice navigating through seminary and she said she had to let go of “hard and fast assumptions.”

“I was clear that I would be a Navy chaplain,” she said. “I was holding that so tightly, and probably missed opportunities in the first couple of years because I was so focused.”

Clark moderated the event and hosted Kohlmann and several of the students at dinner to continue the conversations. He said it was a great opportunity for the students to connect with church leaders on the status of faith-based institutions and the future.

The conversation takes place at a pivotal time for the seminary. In February, it was announced that the University of the Redlands, located in San Bernardino County 60 miles east of Los Angeles, would acquire the 150-year-old Presbyterian seminary, located in San Anselmo in Marin County, just across the Golden Gate Bridge from San Francisco.