They’ve traveled from across the country. Ministers and ecumenical partners are in Louisville this week to pay tribute to the Reverend Robina Winbush. The Associate Stated Clerk and Director of Ecumenical and Agency Relations in the Presbyterian Church (U.S.A.)’s Office of the General Assembly died suddenly in March after returning from a visit to the Middle East.

The morning began with a worship service in the PC(USA) chapel. Singer Rick Bartlett and the Peace Choir sang several of Winbush’s favorite hymns and several of her colleagues in ecumenical work shared their tributes.

“Robina was a caregiver, pastor, scholar, committed Christian, served the church with energy, intelligence, imagination and love, and was a drum major for justice,” said the Reverend Dr. Diane Moffett, President and Executive Director of the Presbyterian Mission Agency. “She helped put PC(USA) on the map by connecting and sustaining relationships. Like an eagle expanding her wings, Robina fought for Jesus, so all people would know the love of God.”

As a young college student at Kent State University, the Reverend Dr. Angelique Walker-Smith, representing the World Council of Churches, said Winbush became a strong influence in the early years. 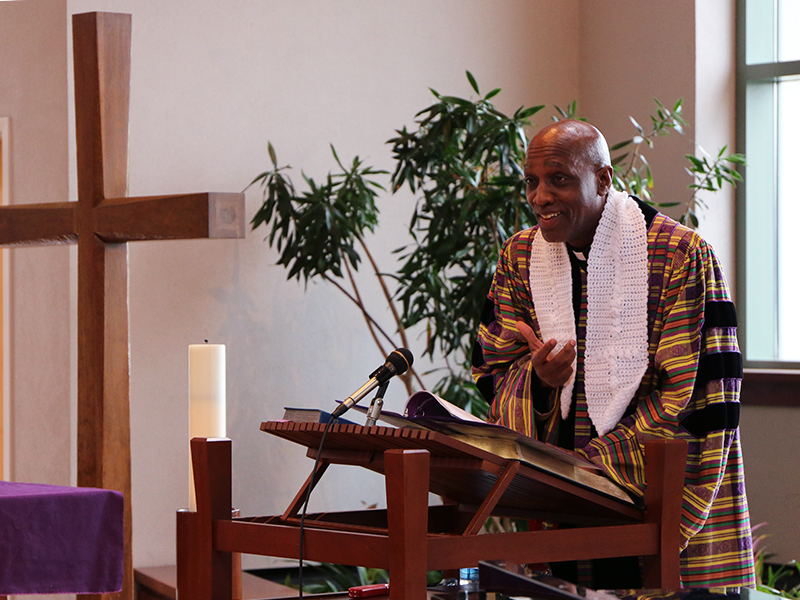 “She became my soul sister for life. Robina was the one that would check on me,” she said. “Throughout our lives, she would visit me, not knowing what my challenges were, but did know intuitively that I was struggling to find myself at times.”

The Reverend Chris Ferguson, general secretary of the World Communion of Reformed Churches, spoke of Winbush’s passion for ministry and always being present for the work ahead.

“In every way Robina showed up. She brought all of the tradition, nurture, and vision. We give thanks that she presented herself as a living sacrifice and being present for us,” he said. “The pain of not being able to count on Robina is enormous. We now must show up and Robina showed us how. We do not go away empty-handed or with downcast heart. She has left us that call and showed us what God requires of us.”

Bishop Eugene Sutton, with The Episcopal Church, remembers when he and Winbush were tasked with finding ways for both denominations to find common ground.

“She and I grew to love each other and sometimes we jabbed each other, but we knew the work we did helped bring this one spiritual family, worshiping in two separate houses, together,” he said. “The fruit of Robina’s work is our churches are closer together and we are mourning in The Episcopal Church.”

“Her name, legacy, and reputation were big. She was determined the work would go forward and determined to live her call. She gave freely and generously of her time, talent, wisdom, her stories, and always gave her best. She was never satisfied for things to be second rate,” she said. “When I think of Robina, I think of service because she gave the best and had a servant’s heart. She was an advocate serving the least, the lost, the marginalized, and the oppressed. She felt it was her personal mission to right every wrong.”

During the eulogy, the Reverend Dr. J. Herbert Nelson, II, Stated Clerk of the General Assembly of the PC(USA), said Winbush was a 21st century saint long before the 21st century came.

“She spoke truth. And I guarantee it would be something you would remember. But she knew how to do it in a loving way. She had some real focused commitment,” he said. “She never tired of doing good and you could see it in her spirit. No matter what our struggles may be, she demonstrated that service to Jesus Christ can never be shortchanged by the weariness of our spirit.”

The ecumenical partners will spend the remainder of their Louisville visit in the PC(USA) offfices in conversation around the ecumenical movement. The meeting concludes on Saturday.