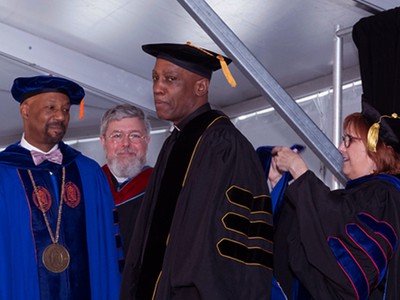 The Reverend Dr. J. Herbert Nelson, II, Stated Clerk of the General Assembly of the Presbyterian Church (U.S.A.), recently received an honorary doctorate of divinity degree from New Brunswick Theological Seminary. The New Jersey seminary bestowed the honor during its recent graduation ceremony where Nelson was the commencement speaker.

“I was surprised to receive notice of this special honor,” said Nelson. “It was not something I was expecting when I was initially asked to preach.”

Nelson had high praise for New Brunswick, calling it a 21st century institution that is working to meet the needs of today’s student.

“This is a seminary that opens at 5:30 in the afternoon. There are new graduates that had been working on a master of divinity degree for seven years, taking one class at a time as they worked and took care of their families,” he said. “There were single parents, visually or physically impaired students. It is what humanity looks like in many ways as people seek to come to the Lord in a very different kind of way and yet bring all of their struggles.”

New Brunswick Theological Seminary opened in 1784. In the 1960s, the seminary placed significant emphasis on urban ministry. Within 10 years, New Brunswick began offering evening classes for part-time students. It is now seen as a diverse, antiracist center of Christian learning with a continued commitment to serving its urban context.

Nelson says he believes the seminary students are not so focused on being successful as they are significant.

“Students come here wanting to learn more about faith. They may not be sure what their calling is, but they know something profound about faith,” he said. “Seminaries are places to nurture. People come with a lot of uncertainty with what’s going on in their lives and this community is different than the work of graduate school communities. The gospel nurtures, prepares, and sends, and the gospel offers new opportunities of which we never dreamed. But we have faith it could happen.”