A crowd of about 250 attended a rally to end cash bail Wednesday in Louisville, Ky. Following the rally, more than 50 people incarcerated because they lacked the money to post bail were released from the Main Jail in downtown Louisville. Photo by Tammy Warren

More than 250 Presbyterians and their friends marched from the Presbyterian Center to Jefferson Square Park near the Louisville Main Jail Wednesday, delivering words of encouragement, pleas to end the cash bail system — and enough money to free more than 50 people being detained because they can’t raise the cash. 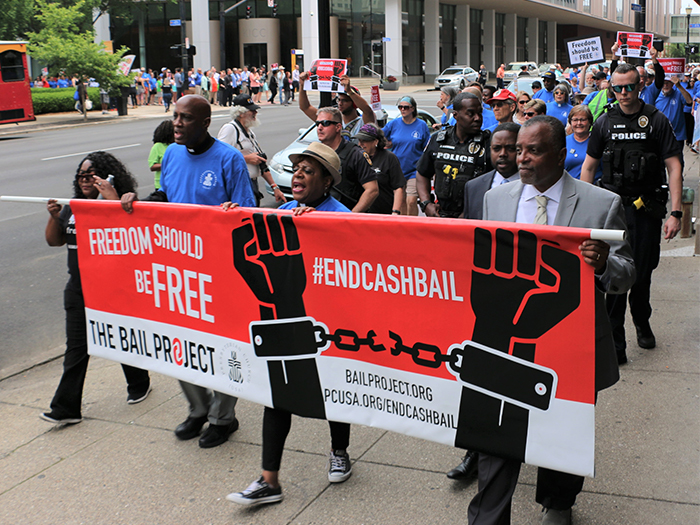 Wearing blue T-shirts and answering cries of “No justice” with roars of “No peace,” the marchers heard from local speakers and those from afar, including J. Phillip Thompson, New York City’s deputy mayor for strategic policy initiatives. The Big Apple has done away with its cash bail system, and 3,000 fewer people are in jail there now than when Mayor Bill de Blasio began his administration in 2014.

“New York City doesn’t interfere with the business of other cities. We are here to support you all and what you’re doing,” Thompson told the crowd, which held signs that said, “Freedom Should be Free” and “Poverty Kills.”

Thompson, a former MIT faculty member, recalled that his African American grandfather and his friends in rural North Carolina were placed in labor camps during the 1920s, charged with petty crimes like vagrancy.

“Government does dumb things because they don’t know what they’re doing,” he said. “This march takes that excuse away.”

Presbyterians donated $10,000 to go with $130,000 from The Bail Project. Holly McGlawn-Zoller, a bail disrupter with The Bail Project’s Louisville chapter, headed over to the Main Jail following the rally to begin the eight-hour process of setting selected captives free.

“Poor people aren’t stupid,” said Shameka Parrish-Wright, Louisville site manager for The Bail Project. “They want justice, and they want to be given a chance.”

The Rev. Dr. Kevin Cosby, senior pastor at St. Stephen Church and the president of Simmons College of Kentucky, called on Christians to “see life from the prism of the poor and the oppressed.”

While we may know the Wolf as the criminal in the Three Little Pigs story, Cosby said he spoke to the Wolf and learned his perspective. To make a long story short, the Wolf told Cosby he was in jail because he’d integrated the Pig neighborhood. The huffing and puffing until he blew the porcine house down came about because of a head cold, for which the Wolf was seeking medication from the Three Pigs. The Wolf did admit to eating one pig — but only to keep the chitlins and pork chops from going to waste. 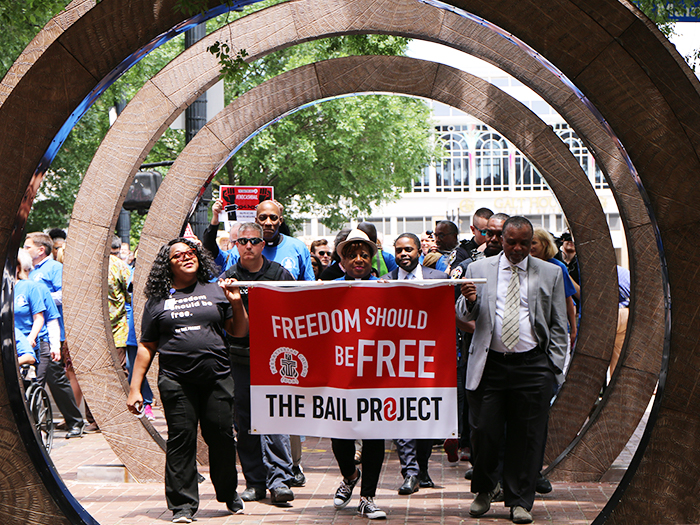 Calling himself a “Baptiterian,” Cosby praised Presbyterians and especially the Rev. Dr. J. Herbert Nelson, II, Stated Clerk of the General Assembly, for being “on the right side of a justice issue.”

Barbara Sexton Smith, a member of the Louisville Metro Council, opened her remarks with, “I’m from the government, and I’m here to help.” She paused a beat, then added, “I’ve waited a long time to say that in a public forum.”

She cited studies indicating that 9 in 10 people who have their cash bail paid by someone show up for their court date and don’t commit further crimes. Smith said that’s because “Somebody made the decision to say, ‘I believe you’ll show up.’ Let’s instill hope in the hearts of others.”

“An unjust law is no law at all,” said the Rev. Dr. Diane Moffett, president and executive director of the Presbyterian Mission Agency. “We will stand with our siblings and say, ‘No more!’ because we are all created in the image of God. Let us not grow weary.”

Nelson reminded those gathered that the work “doesn’t stop here. We still have work to do.”

“Our intent is to take this to presbyteries across the country, until human souls are not harbored for profit,” he said. “We have a General Assembly mandate to be a Matthew 25 Church.”

Nelson asked the crowd to educate their friends and neighbors on the injustice of the current cash bail system, which bears hardest on the poor and on people of color.

“Give people facts when they aren’t being factual,” he said.

Marchers said they were happy to take to the streets as an expression of their faith. 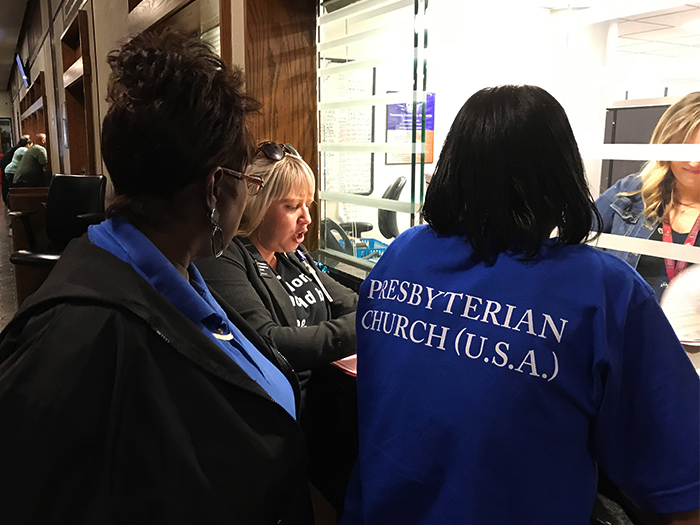 Holly McGlawn-Zoller of The Bail Project, center, is joined by Emma F. Jackson, left, and Bridgette Lewis, right, to pay bail on more than 50 people being detained in Louisville because they didn’t have the cash themselves. Working with the three women is Kasie Mason at right, supervisor in the office of the Jefferson County Circuit Court Clerk. Photo by Tammy Warren 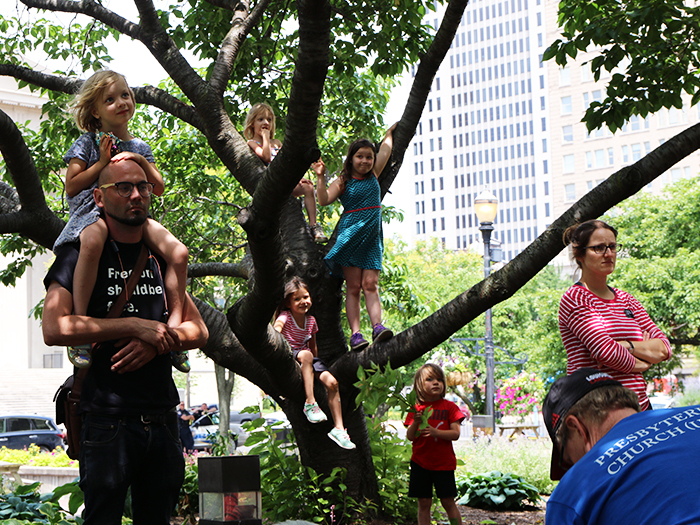 Those attending the End Cash Bail rally sought shade, and a vantage point, wherever they could find it. Photo by Angie Stevens

“Jesus might say to us, ‘When I was in a system that created poverty, what did you do? Did you work to relieve it?’” said Ben Blake, the moderator of Mid-Kentucky Presbytery. “I think being here fits well with wanting to live into being a Matthew 25 presbytery.”

The Rev. Catherine Knott is the chaplain at Hanover College in Indiana, founded in 1827 by a Presbyterian pastor who was an abolitionist. She participated in Wednesday's march while on vacation because "we believe in what we're doing." She called ending cash bail important components of both racial and economic justice.

“There is hope, but we have to get the word out to other people,” said Veda Pendleton, a ruling elder at Harvey Browne Presbyterian Church and an elementary school teacher. “We have the capacity to make a difference. We can’t sit idly by and do nothing.”

Paul Seebeck of the Presbyterian News Service contributed to this report.