Nelson calls for humane treatment for those coming to the U.S. 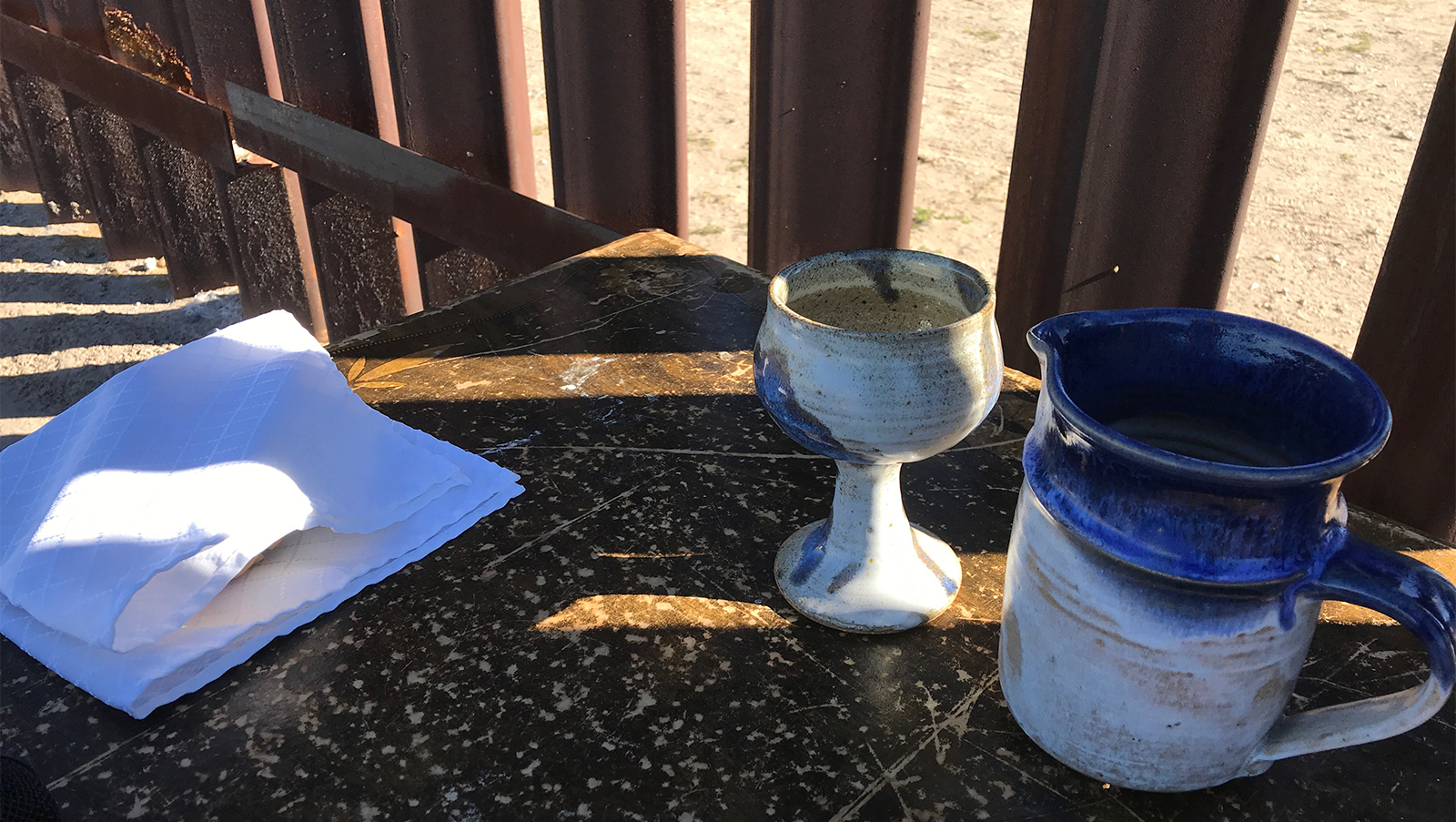 Communion Table Set Up at the Border Wall in Sunland Park, N.M. in November 2018.  Photo by Teresa Waggener.

With both Father’s Day and World Refugee Day falling in the same week, the Rev. Dr. J. Herbert Nelson, II, Stated Clerk of the General Assembly of the Presbyterian Church (U.S.A.) is taking the opportunity to draw attention to the plight of migrant families coming to the U.S. In two letters to members of Congress, the stated clerk is calling for stronger measures to protect and represent families seeking to start a new life.

Referring to the recent deaths of migrant children who died in U.S. custody, Nelson says more should be done to protect those fleeing their homelands.

“Life is precious but every day, in the name of border enforcement, we strip people of their intrinsic human value and dignity,” he said in one letter. “We place lives at risk. I write to you today to request that you defend immigration laws that protect life and improve them to protect more lives.”

Nelson reaffirmed the PC(USA)’s commitment to resettling refugees for decades, adding that generations of fathers have worked hard to set down roots in this country.

“We also pray for those refugee fathers who are stuck overseas unable to reunite with their family already here because of the Executive Order to ban Muslim refugees and decisions to drastically reduce the number of refugees to be resettled,” he said. “Refugees breathe new life and energy into our communities. They bring inspiration and motivation. They may live a precious life of vulnerability, but they are not vulnerable. Refugees embody the awesome strength of the human spirit.”

Read the entire letters below.

The Office of Immigration Issues advocacy page has a PowerPoint to help prepare a group for an in-district congressional visit, a list of immigration advocacy asks and postcards for refugees and immigration reform. Take action in your congregations:

To find additional resources to utilize as you celebrate World Refugee Day and to accompanying refugees, please visit Presbyterian Disaster Assistance at

Letter regarding Deaths of Immigrants While in U.S. Custody:

I write to you today as the highest ecclesial officer of the Presbyterian Church (U.S.A.), a church of 1.6 million members across the United States. As I write this letter, at least six migrant children and two adults have died in U.S. custody.[1] In 2018, there were 283 corpses found in the borderlands.[2] Moreover, we know this does not tell the entire story. In just one county in Texas, graduate students are working to exhume uncounted and unidentified bodies, presumably migrant bodies, who for more than a decade were left in unmarked, mass graves.[3] Life is precious, but every day, in the name of border enforcement, we strip people of their intrinsic human value and dignity. We place lives at risk. I write to you today to request that you defend immigration laws that protect life and improve them to protect more lives.

As a church, we lament and grieve. As Christians, we strive to live faithfully to the greatest commandment of all. When asked what this was in the book of Matthew, Jesus responded, “‘You shall love the Lord your God with all your heart, and with all your soul, and with all your mind.’ This is the greatest and first commandment. And a second is like it: ‘You shall love your neighbor as yourself.’ On these two commandments hang all the law and the prophets.”[4] We are called to love God and in so doing, love all God’s children. This is not a distant, well-wishing love but a love that is unifying, a love that is as close as the love we hold for ourselves. It is expressed when we celebrate communion and sing that we are unified in the “one bread, one body” of Jesus.[5] This unity expands beyond Presbyterians to the church universal. It is expressed when we confess using the Confession of Belhar and we say together “that unity is, therefore, both a gift and an obligation for the church of Jesus Christ … anything which threatens this unity may have no place in the church and must be resisted.”[6] This unity includes all our siblings of all faiths as the children of God. Finally, it is expressed in the faithful action of Presbyterians, who are engaged in binational border ministry, court accompaniment, bus station ministry, and other acts of hospitality, solidarity and resistance.

The United States acceded to the Protocol Relating to the Status of Refugees, promising to not penalize a person entering without authorization if they are seeking asylum and to not return a refugee to a country if they will be threatened. U.S. asylum law, in Section 208 of the Immigration and Nationality Act, states that, “Any [one] who is physically present in the United States or who arrives in the United States (whether or not at a designated port of arrival ...) irrespective of a [person’s] status may apply for asylum.” I find this hopeful as it shows that persons in power in this nation have at one time also understood that life is precious. I write to you today in hopes that some of you, enough of you, are willing to look back and reclaim this collective knowledge of each human being’s intrinsic worth.

The Migration Protection Protocols (remain in Mexico) forces those seeking safety to live homeless in a nation that is not theirs. Expanding the border wall will place more lives at risk of victimization or force more to attempt more dangerous ways to enter the U.S. The threatened tariffs on Mexico will place asylum seekers, who have been forced into homelessness in a nation that is not theirs, at greater risk of victimization. These actions, in the face of asylum law that begs for something different, something more humane, ignores the very human and understandable reasons that people to the South are leaving their nations.[7] These actions place human life at risk. We are seeing this in the deaths of people in U.S. custody and in the remains of life discovered and exhumed in migrant corridors.

In our 1999 church policy, we state that, “love of neighbor requires Christians to seek justice for refugees, asylum seekers, and immigrants.”[8] In this policy we ask for immigration restrictions that are enforced in humane ways such as with the right to legal counsel, the end of expedited removal of asylum seekers, the end of detention of asylum seekers, and a generous admission of refugees. In our 2003 church policy, we opposed “border strategies, which have resulted in an increase in militarization, violation of human rights, deaths from dehydration and exposure, and racial profiling of Hispanic peoples in the borderlands.”[9] The overarching themes for all our immigration-focused policies are about human dignity, protecting human life, and family unity.

That is what I ask of you today. First, defend the laws that protect those arriving for humanitarian reasons: asylum, unaccompanied children, humanitarian parole, temporary protected status, and the limits on the incarceration of children. Then, make them better with the right to counsel, protection from expedited removal, community-based alternatives to detention, generous admission of refugees, and border bridges well-staffed with employees who can respond to claims of credible fear and victims of human trafficking. Finally, use your position to start a discussion about second-country processing, not remain in Mexico where people have already suffered the dangers of the journey and are now homeless with no access to due process, but real second-country processing where people can flee to a UNHCR-approved nations close to them and go through a process with the support of international, nongovernmental agencies to be vetted for refugee status in all three North American nations. I have hope that we can be a nation that has both sensible immigration restrictions and a nation that responds to human need and protects human life. Today I pray that some of you, enough of you, have this same hope and are willing to put your hope into action.

To Members of Congress:

I write to you as the highest ecclesial officer of the Presbyterian Church (U.S.A.), a national church of 1.6 million members. Presbyterians had been resettling refugees decades before the creation of the current Refugee Resettlement Program and are still assisting today. Resettling the world’s most vulnerable has been an important expression of Jesus’ light in the world. Presbyterians understand that call. As we face a growing historic crisis, we must respond as a place of welcome and not turn away. We ask that you ensure that we reach the resettlement goal of accepting 30,000 refugees set by the president for FY2019. We also urge you to set the resettlement goal at 95,000 for FY2020.

As early as 1947, the Presbyterian church was asking for the resettlement of 100,000 individuals. In the General Assembly policy adopted that year, the church said, “As more and more refugees come to our shores, let us open our hearts, our homes. …” In Matthew 25, we are asked to feed the hungry, clothe the naked, and provide shelter for the homeless. We, as Presbyterians, have faithfully engaged this work as we have resettled countless individuals and families. We choose welcome.

On this day after Father’s Day, we think of the generations of refugee fathers who have worked hard to set down roots in this country in order to provide a future for their children. Fathers like Ihsan who arrived in the U.S. two years ago with his wife and two children and were received by a Presbyterian church in Maryland. We also pray for those refugee fathers who are stuck overseas unable to reunite with their family already here because of the Executive Order to ban Muslim refugees and decisions to drastically reduce the number of refugees to be resettled.

Refugee resettlement stories are stories that should inspire hope and resilience, not fear and scarcity. Refugees breathe new life and energy into our communities. They bring inspiration and motivation. They may live a precious life of vulnerability, but they are not vulnerable. Refugees embody the awesome strength of the human spirit. Resettlement work reminds of us of the importance of living in community. Refugees are not a burden but are a light. Faith communities around the globe know and understand that story. They may have been forced from their homes, but not from their dignity. Many Americans choose to welcome them, providing a platform of support, and allowing their new neighbors to grow and flourish.

We respectfully urge you to return U.S. refugee resettlement to the robust program of previous years. People deserve the opportunity to live freely and with dignity. You can hold the Administration accountable to the goals they set for FY2019 to resettle 30,000 refugees this year. Restore the United States as a global leader in resettlement by urging the Trump Administration to set the refugee admissions goal to at least 75,000 refugees in FY2020 and commit the necessary resources to make it happen.