Big Tent attendees to speak out against gun violence

People attending Big Tent in Baltimore this August will have an opportunity to join city residents in an action against gun violence. This year, Big Tent will coincide with the quarterly Baltimore Ceasefire Weekend, a grassroots effort to draw attention to and curtail gun violence in the city.

On Friday, August 2, Presbyterians and others attending Big Tent will gather together and take a one hour walk through downtown.

“When we take that route, we will be passing areas where multiple people have died in gun violence over the past few years,” said the Rev. Deborah McEachran, pastor of Hunting Ridge Presbyterian Church. “We will stop at three different locations for prayer, remembering the names of those who have died. We will be inviting all of the stores and businesses that we pass to join us.”

Baltimore Ceasefire began in May 2017 as a citywide call urging residents to avoid murders for a specific weekend. Various groups organized events to draw attention to the issue. City officials say the weekend resulted in 41 straight hours with no murders.

“When planners wanted Big Tent attendees to engage with Baltimore on that Friday night, I recognized that it was overlapping with a ceasefire weekend,” said McEachran. “We decided to create an event that will be advertised on the local ceasefire weekend agenda.”

McEachran’s church has been involved with Baltimore Ceasefire from the beginning and plans activities each quarter. Depending on the temperature, she says they usually have a good turnout. 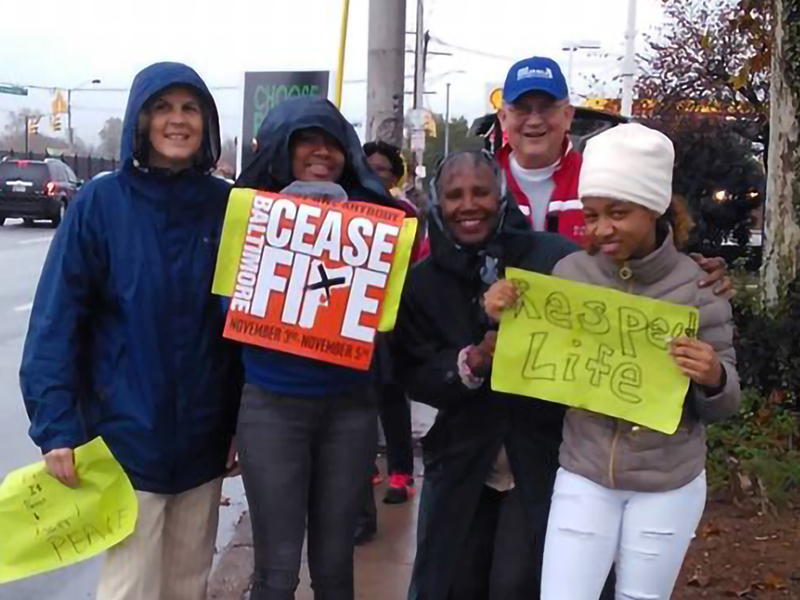 “We had one in February and it was the coldest weekend of the year and there was a small turnout. We gave out hot chocolate and cookies and stood on a busy street corner encouraging folks to recognize the needs to stop shootings in Baltimore,” she said. “There will be other events throughout the city with a larger attendance. Sometimes there are family fair activities, a movie night, but most often, we attend either marches or select a space near a busy road and stand with posters and speak out.”

Although it is not easy to tell, McEachran says she believes the quarterly actions have had a positive impact in Baltimore.

“The more we speak up, the more the word gets carried across our city. We still have problems and violence, but I have to believe if we sit on our hands it’s certainly not going to get any better,” she said.

The Baltimore Ceasefire movement will be one of several activities planned for Friday evening. Other activities include various tours of city art and local museums, and a justice tour of The Center, located in downtown Baltimore, to help equip churches and individuals to work in their neighborhoods.

The theme for this year’s Big Tent is “Called to a Movement Beyond Institution.” Click here to register.