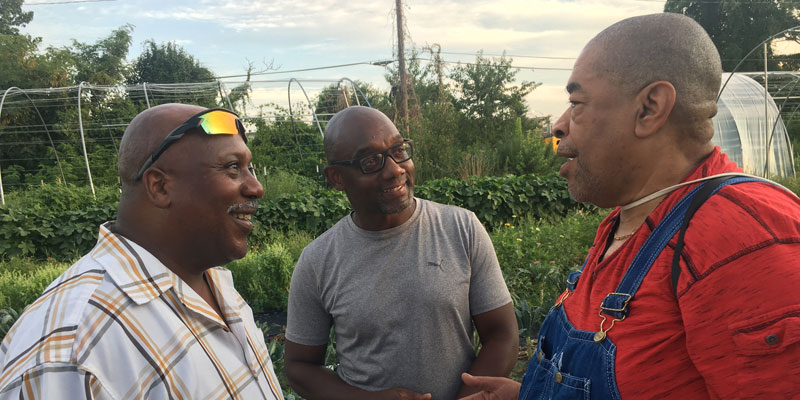 Incarcerated at 14 for 29 years, Troy (center) is one of the returning citizens employed on the Intersection of Change urban farm. He calls founder C.W. Harris (right) and Edward Griffin (left), who runs a cleaning service business, “beautiful people and a blessing from God.” Photo by Paul Seebeck

The Rev. Dr. Karen Brown, who serves as the national chair of the Northeast task force for the Presbyterian Committee on the Self-Development of People (SDOP), says she is “all about poor people.” She sees how the underserved struggle daily in her work at a Baltimore-based nonprofit that provides programs to enrich the lives of those in poverty.

“Because of privilege,” she says, “poor people are not given experience or opportunity. They have no history, no job, and can’t get loans.”

Brown is working to change that through her presbytery-validated ministry as a funds developer for Intersection of Change, which works to enrich the lives of those dealing with poverty related issues in West Baltimore.

More than 50 Presbyterians learned how neighborhood revitalization is happening as the result of two programs funded by SDOP during a Big Tent excursion, “Art Work Tour and Farm to Table Dinner,” held Friday night.

As a direct response to the 2015 civil unrest in Baltimore (when Freddie Gray died of injuries sustained while being transported in a police vehicle), Intersection of Change through its Jubilee Arts program sponsored a five-week artist apprentice summer employment program for youth called Art @ Work. As part of the program, young people ages 14-21 work with city artists to create murals and other artwork that are sprawled on city walls and building. They contain messages of hope, inspiration and sometimes grief.

Brown’s son, Shydi, who’d just graduated from high school, helped create a mural five years ago, featuring Muhammed Ali and Barack Obama.  He is now involved in a Jubilee Arts youth in business program. When driving by the mural he helped create, Shydi’s face lighted up.

“There’s definitely pride, knowing it did some good in our community,” he said. “I appreciate the changes happening because of what we’re doing.” 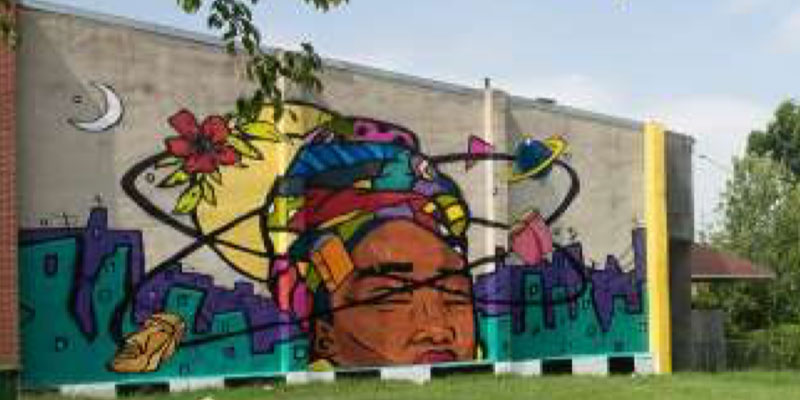 “Not one of these murals have been vandalized,” added Brown. “The young people did it and the community owned it.”

After the tour, Presbyterians saw the impact of Intersection of Change’s Urban Farm, Strength to Love II. While sharing a meal, they heard the story of the 1.5-acre farm.  Located in Winchester, the farm provides employment to citizens returning to the community from incarceration.

“Right here, black males are being put in prisons at the highest rate in the state,” Brown says. “In every demographic, including life expectancy, we’re the worst.”

The returning citizens help grow much-needed fresh produce in West Baltimore. While there are grocery stores on just about every corner in the neighborhood, they mostly sell items like candy, snacks and alcohol.

Which is why Brown no longer describes West Baltimore as a food desert. Because, she said, a desert is “God created,” while apartheid is man-made. "Children and senior citizens dying from high blood pressure are its victims.”

Brown recently secured additional funding for the farm to help repair row covers and tunnels damaged by vandalism. With nothing around the farm, people go shopping at night, helping themselves to the food.

“We need to create a sense of community around it. Then they will protect it,” Brown says. “We haven’t gotten there yet, but we will. We’ve got people going to the drug dealers saying, ‘Stop vandalizing the farm.’”

Located on Pennsylvania Avenue, they, along with a coalition of lawmakers, neighborhood associations and other nonprofit groups are seeking to incorporate and recreate a thriving arts and entertainment district here.

The strip was a cultural hub for Baltimore’s black community in the 1920s through the 1950s. Billie Holiday, one of the nation’s greatest jazz singers, played at clubs on the avenue.

“We were known as the second Harlem,” Brown says. “We’re a historical site for African American arts — the only one in the state.”

But in the 1960s things began to change and when the Rev. Dr. Martin Luther King Jr. was killed, riots occurred, and were followed by white flight. Soon the affluent black community moved farther down from Pennsylvania Avenue, leaving behind the violent anger, which Brown said “was part of the effects of slavery and oppression.”

“Everyone has a responsibility to address race and racism,” says Intersection of Change executive director Todd Marcus. “Whether at the large level, or as a community member. I’m passionate about this community.”

As is the moderator of the Presbytery of Baltimore, Rev. Guy Moody. In closing remarks at the Farm to Table dinner he called the people in West Baltimore, “some of the best people” he has known.

“I see hard-working people, who want their neighborhood to be safe — just like you and I do.”

The Urban Farm, Strength to Love II is supported by national SDOP grants, while the Presbytery of Baltimore’s SDOP funded the Art @ Work summer program. One Great Hour of Sharing gifts support SDOP.