Home News Should birds of a feather flock together?

Should birds of a feather flock together? 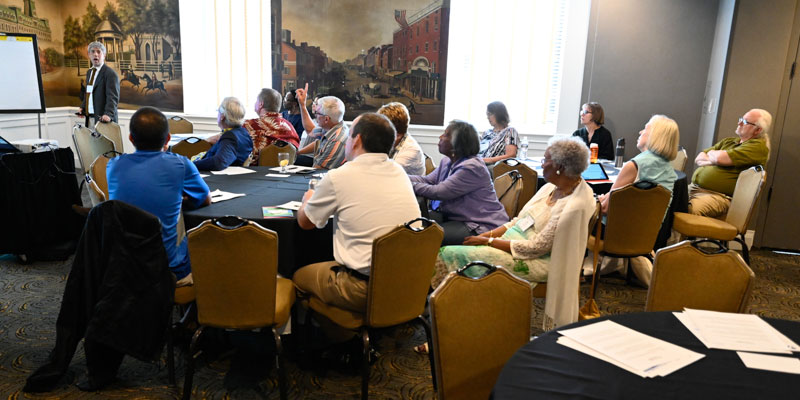 The Birds of a Feather learning opportunity allowed Big Tent attendees to discuss how willing they’d be to worship in a congregation that’s more or less diverse then theirs. Photo by Rich Copley

During a learning opportunity at Big Tent called “Birds of a Feather,” Presbyterians were asked in real-time if they would or would not prefer to be part of a same-race worshiping community.

Seeing the responses, Dr. Perry Chang, associate of Presbyterian Research Services, compared what he was hearing from workshop participants with a 2017 Presbyterian Panel report on Race and Ethnicity.

Seventy percent of the 17 participants said they would prefer to worship in a community where the majority of members were of a different racial, ethnic background than they were, while 20 percent preferred to worship with those of a similar racial background.

“I’m somewhere in the middle,” said Greg Goodwiller, executive of the Synod of Living Waters.

“I love worshiping in many different traditions and I enjoy those experiences. But I think worship at its core is a cultural experience."

And Gail Henderson-Belsito, who worships in a multicultural, multiethnic community in Charlotte, N.C., says she misses some aspects of worship in predominately black churches.

“Martin Luther King, Jr. called 11 o’clock on Sunday morning as the most segregated hour in Christian America,” she said.  “But sometimes those from various racial ethnic backgrounds spend their week at work with predominately white people.  They shouldn’t be vilified for wanting to worship” with people of their own ethnicity. 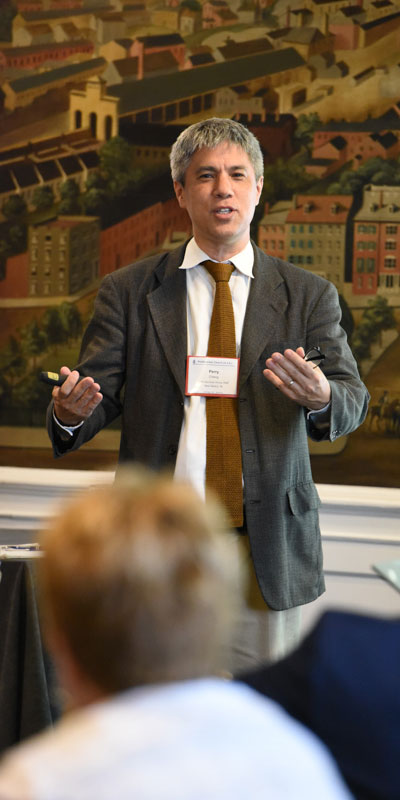 Yet the majority of those surveyed in 2017(54 percent) said they weren’t opposed to worshiping in congregations where they would be a racial ethnic minority, while 36 percent preferred to worship in a same race community.

In a similar 2013 panel report, 45 percent of Presbyterians surveyed had the same race worship preference, while 43 percent said they wouldn’t oppose worshiping in a community where most were of a different racial ethnic background than theirs.

“Interest in multicultural, multiracial ministry is growing, but its prevalence is only growing slowly,” said Chang, citing the Clerk’s 2018 Annual Questionnaire on Intercultural Ministries.

In that report, Congregations were asked to describe present actions their congregations had contemplated to become more intercultural, and what changes they’d made, or challenges they’d faced, as a result. The largest percentage of respondents (12 percent each) reported their congregation is virtually all white or that they have taken no action.

In “Birds of a Feather,” participants discussed around their tables what their churches are doing, if anything, to further multicultural, multiracial ministry.

The Rev. Dr. Jay Losher, transitional minister at Gaithersburg Presbyterian Churchin Gaithersburg, Md., said his congregation in the Washington, D.C. suburbs, is one of the most diverse neighborhoods in the country.  Thirty-eight percent of its members are persons of color — and the majority are immigrants.

Through a discernment process, church members had two chances to be in small groups together and to deepen their intercultural relationships.

“The challenge is people tend to form their groups with people like themselves,” Losher said. “So, we’ve had to intentionally organize mixed groups, which is what they wanted, but were unable to do on their own.”

And Rev. Andy Wong, who co-pastors Foothills Presbyterian Churchin San Jose, Calif., with his wife, Lindsey, said his small diverse congregation sits at the intersection of three neighborhoods that are white, Chinese and Hispanic.  On a given Sunday, Foothills can get all kinds of visitors from around the world.

“Our challenge is it’s so hard to predict,” Wong said. “How do you welcome and understand so many different cultural backgrounds, in addition to the normal political segregation issues?”

In wrapping up “Birds of a Feather,” Chang shared research-based tips on how congregations might grow a multicultural, multiethnic ministry.

“Intentionality and priority are the key,” he said.

“And having a joint worship and partnership with another racial ethnic congregation isn’t a bad thing,” he said, “but it won’t make your congregation more diverse.”