Home News “One Christ, Many Confessions”

“One Christ, Many Confessions”

Church bulletin insert ready for use on Reformation Sunday, October 27 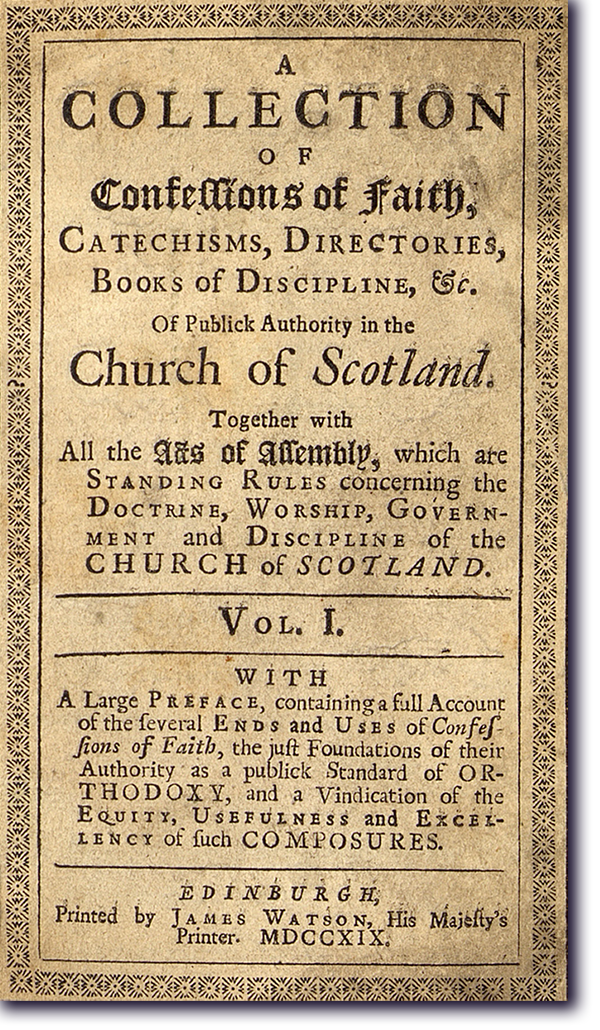 The Presbyterian Historical Society (PHS) is marking next month’s Reformation Sunday with a church bulletin insert about confessions —specifically, the Presbyterian tradition of collecting confessions, catechisms, and creeds in single publications.

Among the rare books preserved inside the National Archives of the Presbyterian Church (U.S.A.) is William Dunlop’s "A Collection of Confessions." Published 300 years ago in Edinburgh, Scotland, the two-volume set brought together the Westminster Standards (1647-48), the Geneva Catechism (1542), the Scots Confession (1560), and the Heidelberg Catechism (1563). As the bulletin insert notes, Dunlop’s compilation placed the relatively new Westminster Standards (including the Westminster Confession) alongside classic texts of Reformed, or “Calvinist,” theology.

“The Reformation forced Western Christians to write statements of their beliefs,” Ross said. “Many churches wanted one universally accepted creed; Calvinist churches generally did not. They allowed each statement to remain rooted in the occasion that gave it birth and assembled books of confessions instead.”

Books of confessions gave communities in Zurich or Geneva or Edinburgh the chance to declare their beliefs in their own words, while honoring their unity with other Reformed communities. As Reformed churches grew in the Americas, Africa, and Asia, the practice of collecting confessions continued.

Ross notes that the Belhar Confession, the most recent addition to the PC(USA) Book of Confessions (2016), “joins with other Reformed confessions when it insists that urgent social questions be answered with a confession of who Jesus Christ is, and what this requires of us. Faith implies ethics.”

The Belhar Confession grew out of the Dutch Reformed Mission Church’s opposition to Apartheid in South Africa. As noted in the 2016 Book of Confessions, the PC(USA) General Assembly adopted Belhar so that its “witness to unity, reconciliation, and justice might help the PC(USA) speak and act with similar clarity at a time when it faces division, racism, and injustice.”

In addition to the 2019 Reformation Sunday insert, PHS shares its previous Reformation and Heritage Sunday inserts through its website. Each is available for download by churches, study groups, or individual Presbyterians — whether in Edinburgh, North Carolina; Geneva, New York; or anywhere else Presbyterians gather to reflect on their history.

Reformation Sunday, the last Sunday in October, is set aside by the PC(USA) to commemorate the events and figures of the Protestant Reformation; this year it falls on October 27. The Presbyterian Historical Society is a ministry area of the Office of the General Assembly.