Home News Listen and get uncomfortable

Listen and get uncomfortable

Moderators receive insight on community engagement in times of unrest 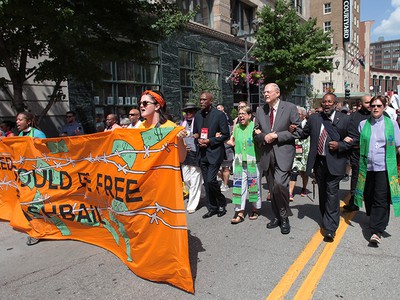 Presbyterians took part in community action during the 223rd General Assembly in St. Louis in 2018. —Photo by Danny Bolin

The issues around racial unrest and the call for justice and change were major topics of discussion during the final day of the virtual Moderators’ Conference.

During a late morning session, the Reverend Denise Anderson, coordinator for racial and intercultural justice with the Presbyterian Mission Agency, led a panel discussion involving several Presbyterian church leaders who have been involved with, or are currently involved in, community actions that have generated national attention.

Counihan took the role of pastor in St. Louis two-and-a-half weeks before the shooting death of Michael Brown in 2014.

“I found myself thrust into a conversation that I wasn’t prepared for, nor was the presbytery. But we shouldn’t look to the presbytery to do all of the work,” she said. “There are organizations already doing the work in your community. You don’t always have to start a new presbytery program.”

Counihan advised the moderators not to wait to get involved, but to make themselves uncomfortable.

“Don’t wait for an authority to tell you how to handle this. Don’t wait for the presbytery or moderator to coordinate something in your community,” she advised. “If the community is out, that’s where the church needs to be, and we will figure it out as we go. It may be uncomfortable, you may not know your role, just show up ready to listen.”

Moore agreed, adding that people need to get involved in the things that motivate them.

Moore says he found an openness at the table that encouraged and inspired him.

“We developed a team to see what we could do and held meetings every other month, including Black and white churches,” he said. “You have to normalize being uncomfortable to stick together. That’s why we were able to come out with a program to dismantle racism. Work is not at the presbytery. Work is behind the scenes, building relationships.”

Loveall has pastored in Kenosha since 2001 and found his community thrust into the spotlight this summer in the shooting, by police, of Jacob Blake and the subsequent protests that resulted in Kyle Rittenhouse being charged with opening fire and killing demonstrators.

“When everything exploded in our community, our church was really split. If you have conversation around Black Lives Matters and racial justice, it can tear at the intelligence of your community and go right to the fear,” he said. “We are holding our breath, waiting for the next shoe to drop.”

Landino said that after George Floyd’s death, pastors were preaching “Black Lives Matter” from pulpits that had never heard the word “Black.”

“We’ve been watching this pot boil for decades and when it finally boils over, we blame the water, not the fire. People who speak to me about damage don’t have the names and faces of those impacted; it’s not personal to them,” he said. “It’s important to understand the history of these places where all of this is taking place. Some people who complain don’t understand what it’s like to have a knee on their neck. There is willful ignorance that we need to address.”

Landino said that if churches don’t take the lead, Fox News will do it for them. He urges churches to create conversation spaces.

“When we talk about dismantling racism, we get lost in what that means. It’s a long history,” said Moore. “We don’t need PhD’s or parliamentarians, we need white and Black prophets, and this is the time for that.”

Counihan followed up on the comments about conversation spaces and urged pastors to take advantage of the opportunities they are given each week with their congregations.

“Where else do people have that much access to people where you can say whatever you want?” she asked. “That’s a tremendous opportunity and you should have those brave conversations and practice being uncomfortable and give each other virtual hugs afterwards.”

Landino says moderators have the same opportunity to impact the meetings they lead.

“You have input on the agenda and docket of your meetings,” he said. “You can create spaces around storytelling, moments of recognition that can be permission-giving to people who’ve never heard a presbytery say this.”