Home News A history lesson on Presbyterian mission in Korea

A history lesson on Presbyterian mission in Korea 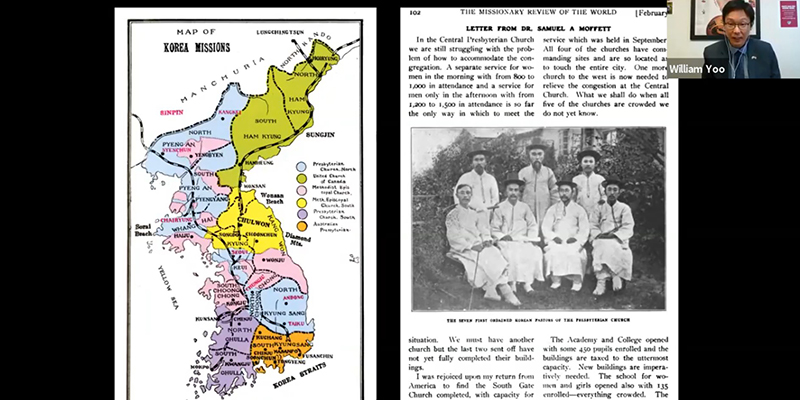 How do we understand the history of Presbyterian mission in Korea? How do we sometimes misunderstand it?

In a PHS LIVE webinar on Nov. 19 presented by the Presbyterian Historical Society (PHS), Dr. William Yoo discussed how the “Hermit Kingdom” changed in a matter of decades to be regarded as the “Palestine of the Far East” by American missionaries, and how differences of race and cultural perspective shaped Korean-U.S. Presbyterian partnerships into the 21st century.

Yoo is an associate professor of American religious and cultural history and director of the Master of Divinity Program at Columbia Theological Seminary in Decatur, Ga. He is the author of "American Missionaries, Korean Protestants, and the Changing Shape of World Christianity, 1884-1965."

Yoo also serves on the Board of Directors of the Presbyterian Historical Society and is a member of the General Assembly Committee on Representation.

Joining Yoo from Philadelphia via Zoom and Facebook Live were PHS staff members Kristen Gaydos and Fred Tangeman. PHS will share the full session on its website in two weeks.

Yoo provided a 20-minute overview of early Presbyterian mission in Korea, including first encounters between Presbyterian missionaries, such as Horace Underwood and Horace Allen in the late 19th century, and the March First Movement for Korean Independence in 1919.

Yoo explained that Korean Christians, including women educated through Presbyterian mission schools, helped lead the independence struggle against the occupying Japanese. Koreans inside and outside the Korean Peninsula connected the struggle for national liberation to their spiritual work. In the United States, civil right advocates such as Howard Thurman drew inspiration from Korean Christians’ outspoken opposition to colonialism and other forms of oppression.

Yoo ended the session by answering questions from webinar attendees that focused on the ways mission work responded to Korea’s eventual liberation in 1945; the emergence of autonomous Korean denominations and church leaders, such as the Rev. Kyung-Chik Han, after the Korean War; and changes in ecumenism that are shaping Korean-U.S. Presbyterian partnerships to this day.

Several webinar attendees asked why Presbyterianism, and more broadly Christianity, received such a welcome reception in Korea. Yoo mentioned that certain institutional structures predating so-called first encounters made church-building easier in Korea than in other mission locations, and that Christianity appealed to some because of its association with anti-imperialism. But most important to the success of the Korean church, Yoo said, were the countless individual Koreans receptive to the message of the Gospels.

He also said that recognizing differences among mission histories and cultural perspectives is an important part of being a united church. Korean, Black, and Native American Presbyterians are some of the groups he identified as being “more outspoken, deliberative, and engaged about addressing unjust political and social realities.”

“There are rich differences in the ways we interpret our shared theology,” Yoo said. “We need to celebrate the unity and the diversity, and celebrate those differences.”