Plenary dates to be determined 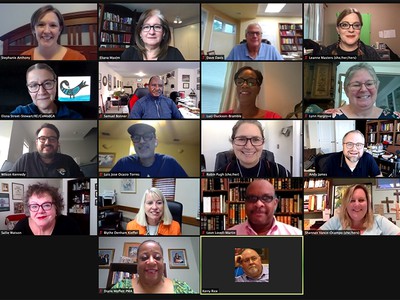 The dates for the 13 committees of the 225th General Assembly of the Presbyterian Church (U.S.A.) to gather in-person in 2022 have been set. The Committee on the Office of the General Assembly (COGA) voted on Thursday to hold the meetings over a two-week period, June 19 – July 2, 2022, in Louisville, Kentucky.

Earlier this month, COGA approved plans for a hybrid assembly that will include both online and in-person gatherings. The assembly committees will split the time during the two-week schedule to consider church business.

Some COGA members expressed concern regarding overlap with other denominational meetings such as the Worship and Music Conference to be held at the Montreat Conference Center.

“It’s inevitable that the summer of ‘22 will be a big jubilee summer, where we all get back together in a safe way,” said Wilson Kennedy, who facilitated the COGA working group focusing on future assembly gatherings.

Kerry Rice, deputy stated clerk of the Office of the General Assembly, says staff has not reviewed the church calendar for potential conflicts, adding that the time set aside for committees will require fewer people to be involved.

“The weeks we set aside will look very different than the traditional eight-day assembly and will not be a ‘ya’ll come’ for these committees,” he said. “The committee times will be focused on commissioners and advisory delegates that have business before them. I’m not sure we will have the same level of conflict that we might have during a traditional GA.”

All plenaries will be held online except for an initial quorum gathering. Early next year, COGA will determine the dates for the plenaries. OGA staff say they have confirmed the availability of hotels during the period.

The assembly was initially scheduled to be held in Columbus, Ohio. The move is expected to save the church more than $300,000.

COGA also voted to form a 12-person design team to assist OGA staff in planning the 2022 assembly. The team will consist of COGA members, the stated clerk, a Youth Advisory Delegate and a former GA moderator, among others.

The Rev. Dr. J. Herbert Nelson, II, Stated Clerk of the General Assembly of the PC(USA), provided his vision for the next assembly in Louisville.

“Louisville, like every city, is plagued with its own struggles. None are free from deprivation, brokenness and pain. There is no way of being free from engaging that,” he said. “In past assemblies, we’ve been inside buildings and big arenas, and yet there is a sense of calling people outside to engage the communities we are a part of.”

Nelson said that now is the time for transformation within the denomination.

“We cannot be all things to all people, but we can be a very present help in times of trouble,” he said. “One of the things I hope will be different at this next assembly is the engagement in the life of this community.”

Nelson says he hopes to empower people at General Assembly to do more than pass policy, but to also engage in their own communities’ needs and issues.

“I’m convinced in this time of history, there is a need for a real sense of re-evaluating who we are in the 21st century,” he said.

COGA members asked the clerk to provide his vision in writing so they can best determine how to move the vision forward.

“The next General Assembly will not remain in this form forever and ever,” said Robin Pugh, COGA member. “We will do the best we can, because this is the form that the church needs right now, but we might make more changes in the future. We need some framework to show the direction in which we are going.”

“The clerk’s vision of an assembly is not just about passing resolutions, but taking action and that is very exciting,” said COGA’s Dave Davis.

COGA also heard a year-end report from the Merger and National Unity working group. Eliana Maxim reported that the group has gone as far as it can go until the Presbyterian Mission Agency Board completes its own evaluation. She added that group members will continue to have conversations with the PMAB over the next six to eight months.