The Co-Moderators of the 223rd General Assembly (2018) have selected the Bible study leaders and the preachers for the worship services for the 224th General Assembly (2020) to be held in Baltimore this summer. The Reverend Cindy Kohlmann and Ruling Elder Vilmarie Cintrón-Olivieri announced the list during the meeting of the Committee on the Office of the General Assembly (COGA) on Wednesday.

One of the Co-Moderators’ responsibilities is to invite preachers for three General Assembly (GA) worship services as well as select Bible study leaders and the format.

“James and Mary will develop the curriculum for our sessions,” said Cintrón-Olivieri.

Cintrón-Olivieri says they are “changing up” the format for Bible study this year. 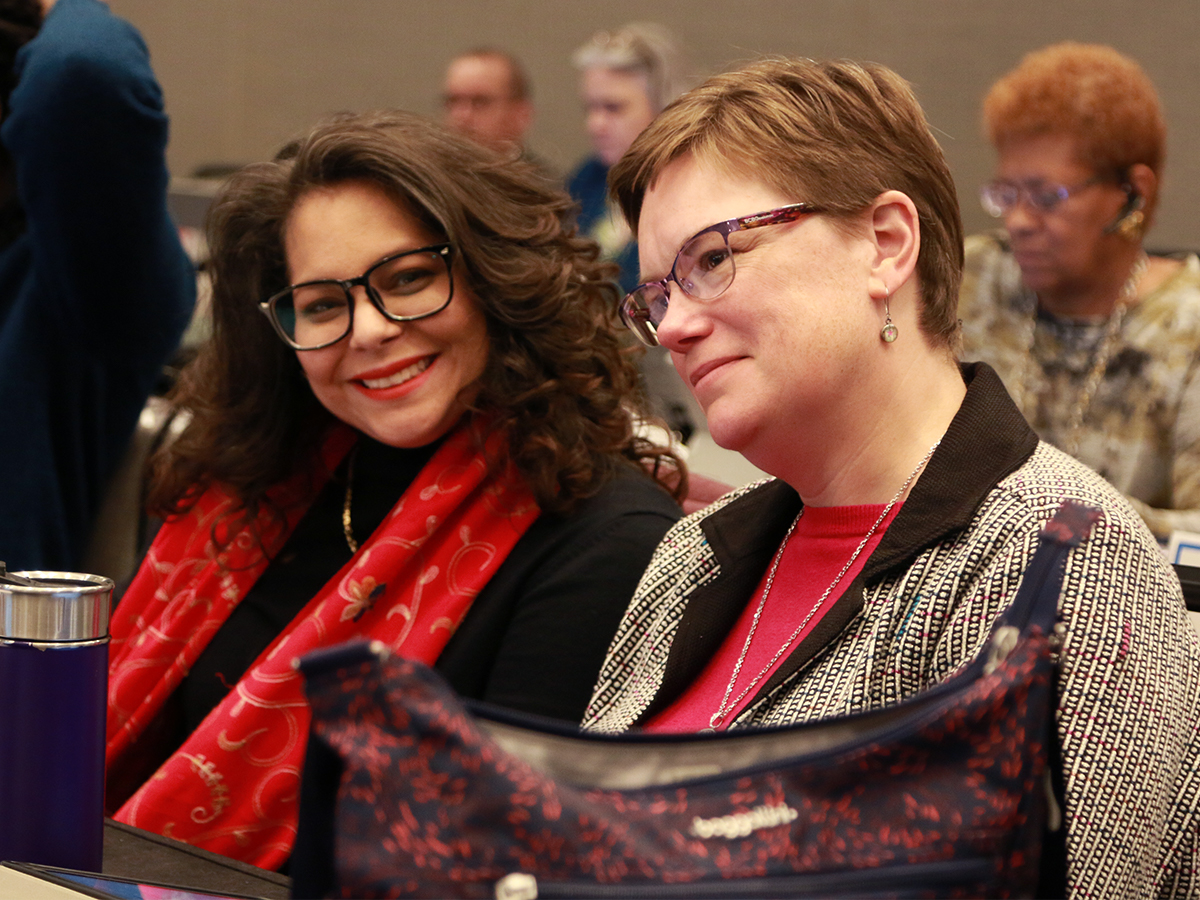 Co-Moderators of the 223rd General Assembly of the PC(USA), Ruling Elder Vilmarie Cintrón-Olivieri (left) and Rev. Cindy Kohlmann (right) participate in the COGA meeting in Baltimore on June 12, 2019. Photo by Randy Hobson.

“We have asked them to prepare two different Bible study formats: one that is lecture based that will be received in committee rooms as well as in a location for visitors and others to participate, and one that is more interactive, also shared in committee with a place for others to participate,” she said. “Our vision is that the Bible study will be seen as the first agenda item for the committees on Monday and Tuesday morning instead of as a separate activity.”

Three preachers have been selected to bring the message on the final days of the assembly. Eber Candelario Olivieri will speak on Thursday; Y. Eunice Yang will preach Friday; and Karla Dias will speak at closing worship on Saturday.

Candelario Olivieri, a minister of the Word and Sacrament and a graduate of the Seminario Envangélico de Puerto Rico, is pastor of la Iglesia Presbyteriana en Corcovada, Puerto Rico, Presbiterio del Suroeste.

“Eber is an amazing human being and community leader. When Hurricane Maria hit, his church became a center for aid and help since it’s in a remote area of the island,” said Cintrón-Olivieri. “Getting aid to people was difficult, but his church became a hub for help.”

Cintrón-Olivieri says he will be bringing the message in Spanish.

Yang, a minister of Word and Sacrament, is an Army reserve chaplain who has served with distinction and recently spearheaded the efforts to recognize one of the last “Buffalo Soldiers” of World War II.

“We decided early on that we wanted to highlight and lift up the ministry of military chaplaincy,” said Kohlmann. “Yang currently serves in the Baltimore area as a reservist and hospice chaplain. She brings passion for people in her care.”

Dias is a commissioned ruling elder who serves as pastor of the Londonderry Presbyterian Church, which recently celebrated its 300th anniversary.

“This mostly white congregation called Dias, who is Brazilian, as its pastor in New Hampshire,” said Kohlmann. “She has an evangelist’s heart and talks about Jesus everywhere she goes, whether it is the grocery store or the coffee shop.”

Kohlmann says that under Dias’ leadership, the congregation is growing and has become known in the community as a safe, loving place.