OGA staff presents plan for business and worship in Baltimore

Julia Henderson (left) and the Reverend Dr. J. Herbert Nelson, II, discuss their plans for the 224th General Assembly (2020)with COGA on Wednesday in Baltimore. Photo by Randy Hobson.

“We began our assembly conversation by taking a look at some serious issues, not just justice, but actually doing transformative work,” he said. “We are trying to change this assembly from thinking about the institution and begin to see it as a way to do transformative work in this world.”

The theme at this year’s General Assembly is “Called to a Movement Beyond Institution.” Nelson says he wants to see change in the way churches conduct ministry in their own communities.

“We have Christian houses of worship on every corner, so how do we move from institution to taking seriously a call to movement?” he asked. “The call of the church goes beyond the building, the four-hour session meetings and internal fights. It is about being serious in the communities we serve. This is a wake-up call.”

Ruling Elder Julia Henderson, interim director of assembly operations for OGA, reported on some of the changes for the 224th General Assembly (2020), including a re-shuffling of the committee structure. They include: 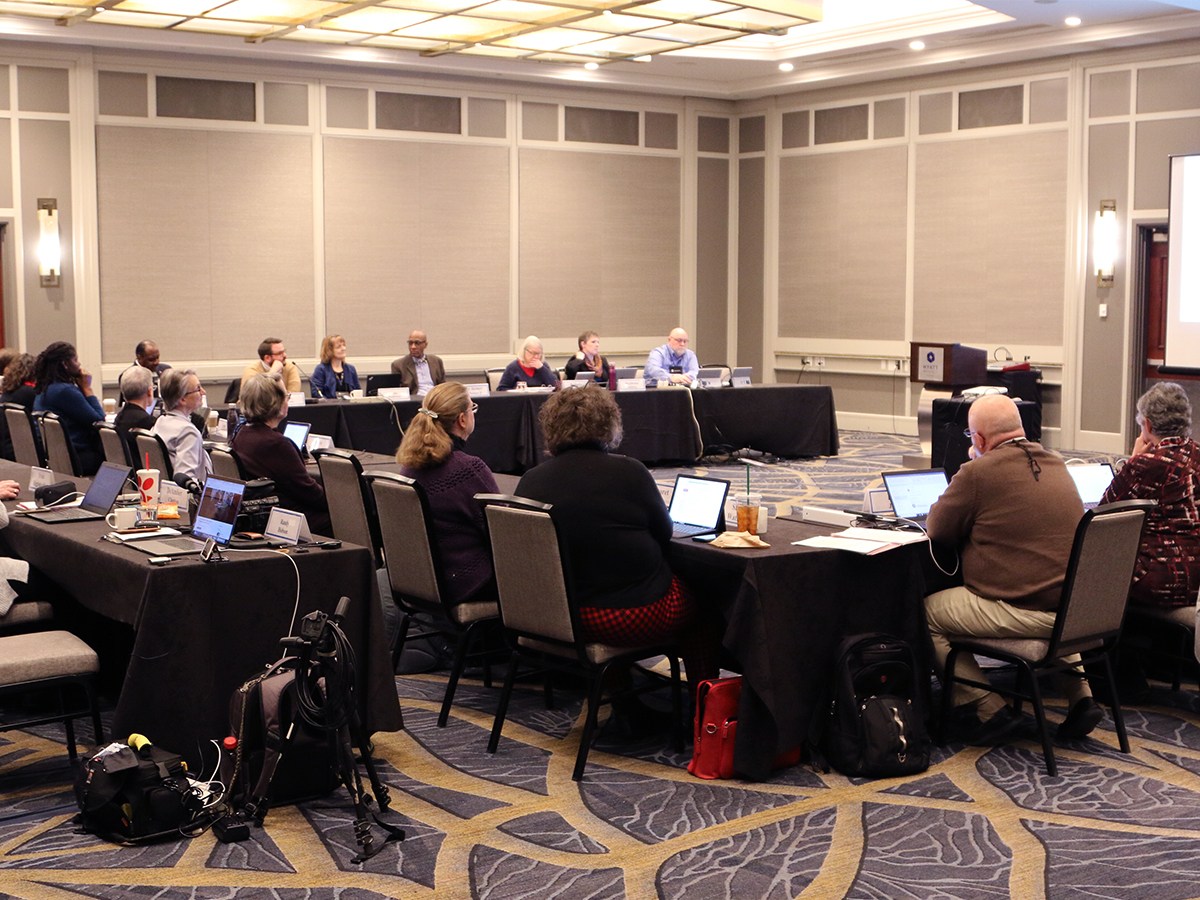 COGA is meeting in Baltimore through midday Friday. Photo by Randy Hobson.

Deputy Stated Clerk Kerry Rice said previous committee structures have kept OGA and PMA budgets in separate committees. The new format will allow them to be considered together.

“This is a reimagining of the committee structure. These are all going to look different and it will take a while for us to get used to that. The idea is to get us out of the boxes we are in because there were certain OGA and PMA committees that didn’t connect. We’re moving away from that model,” he said. “We are trying to show a unified church, moving together.”

Henderson said there are also plans to hold a community celebration event during General Assembly.

“The Presbytery of Baltimore will host an event to celebrate youth and the efforts currently underway to create jobs,” she said. “The hope is this initiative will lead to an end of the pipeline from school to prison.”

The PC(USA) has focused a lot of attention on Baltimore the past two years in preparation for General Assembly. The Hands and Feet Initiative focused on providing support to The Center, a nonprofit organization working to connect with low-income families within the city. The church held its Big Tent celebration in Baltimore last August, which included a march against gun violence.

The city is reeling from a shooting on Wednesday that left two police officers wounded and the suspect dead. Nelson addressed that in his remarks to COGA.

“We are seeing this every day. People afraid to go outside. It used to be older people, but now everyone is locking their doors early,” he said. “Their own deprivation, loss of hope, frustration with life, and all of this is happening as their own deprivation drives them, yet we have Christian houses of worship on every corner. How do we move from institution to taking ministry to a new level?”

Tags: baltimore, coga, committee on the office of the general assembly, ga224