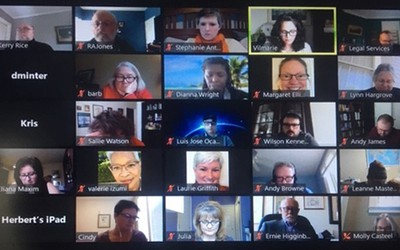 A final decision on the 224th General Assembly (2020) is still a week away, but the Committee on the Office of the General Assembly (COGA) spent a bulk of its second day in a virtual meeting, looking at critical business to be considered.

COGA is considering a shorter, two-day virtual assembly that would restrict the amount of business brought before commissioners.

The Reverend Dr. J. Herbert Nelson, II, Stated Clerk of the General Assembly of the Presbyterian Church (U.S.A.), says he’s heard from many across the denomination who have expressed concern that social justice issues would not be among the items of business during this assembly.

“We are not divorcing ourselves from social justice. We are in a world and nation that is hurting in many ways and people cannot connect with loved ones who are dying. They try to send text messages to a loved one and they never receive them,” he said. “We have always been pro-justice. This is not a diminishing of that. I do think there is a need for us to be very poignant in our way of expressing who we are as Presbyterians.”

Nelson says he’s wrestled with how to address these issues as it relates to the COVID-19 outbreak and its impact on the world.

“I really hope there can be at least an introduction in this assembly, in a different way, and see that this is not a stepping back of our commitments, but as a stepping into a contextual situation that will change the voice of this denomination,” he said. “There is something about this window of spiritual, physical, and global crisis that we have to speak into because there is no other choice and this is what the gospel requires.”

COGA approved a motion to add elements in the opening and closing worship at this year’s assembly.

“We want to show the fullness of who we are as Presbyterians. It does not address all of the questions or appease all of the concerns. We are in a season in which there are certain things a two-day assembly cannot do,” said COGA member Eliana Maxim. “We live in that tension and there will be disappointment and things left off of the table. This is an attempt to reflect that there is a greater fullness of who we are than what we are presenting at the assembly.”

Under the plan, Nelson will open the assembly acknowledging the new reality left by COVID-19 and highlighting the work of Presbyterians around the world as it relates to social justice and equity and inclusion issues.

Pastors, presbyteries, mid councils, and churches will be asked to send video via their smartphones to show how they are ministering to communities during COVID-19.

Maxim says the closing worship could be a reflective prayer service, incorporating music.

“I think it will be a long time before anyone is able to go to a concert. Maybe our musical artist’s gifts, incorporated into a prayerful, reflective service, take us from lament to hope,” she said.

Several events that would normally take place during a weeklong gathering, would be reshuffled:

COGA also approved a plan to schedule a networking session for small groups of commissioners and advisory delegates to gather virtually to create a “sense of community.”

COGA also received an update on a proposed unified budget for 2021 and 2022, covering the Office of the General Assembly (OGA), the Administrative Services Group (ASG), and the Presbyterian Mission Agency (PMA), totaling $90.5 million in 2021, and $92.6 million for 2022. Per capita apportionment rates were not approved yet, awaiting updates to the budget.

Kathy Lueckert, President of PC(USA) A Corporation, presented the proposed budget saying it will change over the next several weeks, adjusting for the impact of COVID-19.

“We’re developing three models for you to look at in the next few weeks: optimistic, realistic, and pessimistic plans,” she said. “This is moving fast and furious and we are doing the best we can with the information we have available.”

“The unified budget is a result of months and months of work, but we realize that it represents what was true forty-five days ago,” said Kerry Rice, Deputy Stated Clerk with OGA. “It will provide a baseline for us as we continue to look at revised revenue projections and decreased expenditures.”