Home News 224th General Assembly to be conducted online only

224th General Assembly to be conducted online only 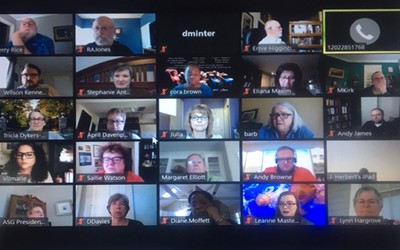 For the first time in the history of the Presbyterian Church (U.S.A.), the denomination’s General Assembly will be held online only. The Committee on the Office of the General Assembly (COGA) voted unanimously Tuesday to approve a plan for a reduced assembly gathering that will require everyone involved — commissioners, advisory delegates, corresponding members and staff — to participate in a digital assembly.

The final decision was expected to be voted and announced on Thursday; however, staff from the Office of the General Assembly received information Tuesday that prompted a quick call with COGA.

“As we have discussed, we knew we would reach a point in time in our contract with the Baltimore Convention Center and hotels where they would not be able to meet the agreed upon services listed in our contracts and that day is today,” said Julia Henderson, OGA’s interim director of assembly operations. “This is a force majeure. We need to let them know we are canceling because they cannot meet their obligations.”

Force majeure is a clause in contracts that frees both parties from liability or obligation when an extraordinary event or circumstance beyond the control of the contractual parties prevents services from being performed.

In this case, the COVID-19 virus has resulted in numerous conference cancelations. The General Assembly was scheduled to be held June 20-27. The convention center has converted space into a field hospital for infected patients.

Over the last few weeks, COGA and staff of the Office of the General Assembly have been working on contingency plans should the convention center not be available. The assembly will take place over three days; Friday, June 19; and Friday and Saturday, June 26 and 27.

Details are still being worked out, but the plan includes:

Some COGA members asked whether the church would be able to recoup all deposits to this point. OGA officials believe they will. Further discussions with the convention center will take place.

Now the attention turns to preparing for the upcoming assembly.

“We will send invitations to mid council leaders to attend one or two sessions next week with OGA staff,” said Henderson. “We will appeal to them to help us to ensure commissioners and advisory delegates are ready to go. We are also urging those commissioners who are no longer available to serve to let the stated clerk know as soon as possible.”

Other planned events will include technical training for commissioners and advisory delegates, participation in a virtual Poor People’s Campaign event, Bible study and electronic group gatherings.

COGA will conduct another virtual meeting on Thursday, April 23, to continue work on finalizing the assembly agenda.